DOHA (92 News) – Qatar has expressed the desire to expand bilateral cooperation with Pakistan in various sectors, including trade, education, and transport. Talking to Foreign Minister Shah Mehmood Qureshi during a meeting in Doha today, Qatari Prime Minister Sheikh Abdullah Bin Nasser Bin Khalifa al-Thani said the people of his country keep their Pakistani brethren in high esteem. He said people of both countries have great confidence in each other. 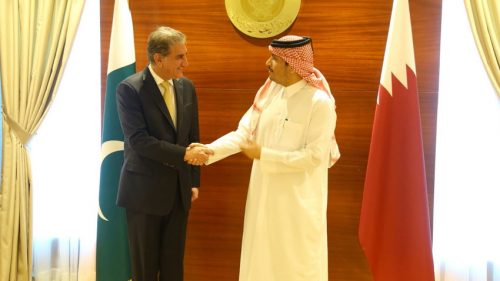 Thanking Qatari government for its offer to enhance bilateral cooperation in various fields, Shah Mehmood Qureshi assured Pakistan's full cooperation in matters of mutual interest. He said bilateral relations between the two countries are getting stronger at a fast pace, which is a welcoming sign. He said Qatar is trustworthy and friendly country of Pakistan. Besides discussing bilateral ties, they also exchanged views on important regional and international issues. Earlier, Foreign Minister Shah Mahmood Qureshi also held a meeting with his Qatari counterpart Sheikh Mohammed bin Abdulrahman Al-Thani. The two sides agreed to boost bilateral trade between the two countries. Matters pertaining to mutual ties and changing situation of the region were discussed at the meeting. Speaking on the occasion, Shah Mahmood Qureshi said Pakistan's trade with Qatar has witnessed an unmatched increase in last one year. He said Pakistan will support Qatar at all levels in upcoming FIFA world cup in 2022. Qatar’s Foreign Minister lauded Pakistan's positive role for bringing peace in Afghanistan and the region. He said more opportunities will be provided to Pakistani workers in Qatar. Sheikh Mohammed bin Abdulrahman Al-Thani also held a luncheon in honor of Foreign Minister Shah Mehmood Qureshi.