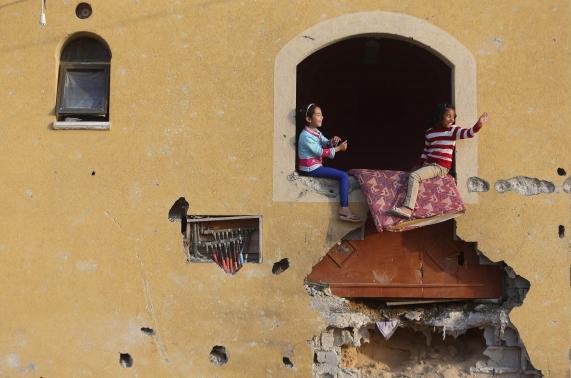 GAZA - A Qatari official visiting a Gaza neighborhood heavily bombed in last summer's war with Israel said on Tuesday the Gulf Arab state had begun a project to rebuild 1,000 homes as part of a $1 billion aid pledge. Mohammad al-Amadi, head of the Qatari Committee to Rebuild Gaza, said that earlier in the day Israel had allowed four truckloads of cement into the Gaza Strip so that the planned construction of the dwellings could begin. The Israeli military agency that oversees policy related to civilian supplies to the Islamist Hamas-ruled Palestinian enclave said such shipments are handled by the Palestinian self-rule body under "a joint mechanism for reconstruction" established jointly by the United Nations, Israel and the Palestinian Authority. "Today we are starting the $1 billion (effort)," Amadi told reporters as he stood in the rubble of a hospital destroyed during the 50-day Gaza war. Palestinian and United Nations officials said 130,000 houses had either been demolished or damaged, largely by Israeli air strikes and shelling, in the densely populated coastal territory. "We want more countries to come and build Gaza. Gaza suffered from previous wars," Amadi said. At a donors' conference in Cairo in October, some two months after the latest conflict ended in an Egyptian-brokered ceasefire, Qatar said it would provide $1 billion in reconstruction assistance for Gaza. In all, some $5.4 billion was pledged at the meeting, but little of that has reached the Gaza Strip. U.N. officials have said internal Palestinian divisions have blocked oversight by the Western-backed Palestinian Authority, Hamas's rival, of the import of building materials. Israel also tightly limits the flow of concrete, cement, iron bars and other materials into Gaza, calling them "dual use" items that could have a military purpose if they were seized by Hamas to rebuild tunnels used to launch attacks. Qatar is a major ally of Hamas and currently hosts the group's chief political leader, Khaled Meshaal. - Reuters