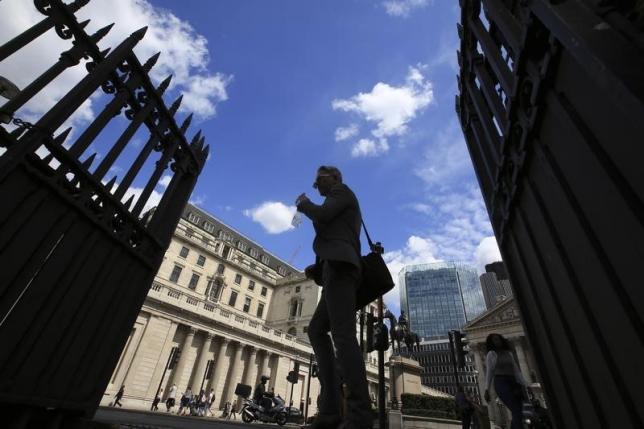 LONDON - Bank of England asset purchases helped boost inflation after the financial crisis but its forward guidance has had no significant effect, research co-authored by Monetary Policy Committee member Martin Weale concluded on Thursday. The central bank faces a decision in two weeks on what form of stimulus, if any, it should adopt to cushion Britain's economy from the shock of last month's vote to leave the European Union. Weale earlier this week said he was not convinced action was needed, while most of his colleagues expect to approve as-yet unspecified measures, likely including a cut in interest rates to a record low. The paper, which Weale wrote with three BoE researchers, showed quantitative easing via 375 billion pounds of government bond purchases between March 2009 and October 2012 had a noticeable effect on companies' price expectations. "QE interventions played a modest role in stabilising inflation expectations in the United Kingdom in recent years. Our findings for other policy interventions were not conclusive," it said. For every 50 billion pounds of purchases, firms expected inflation in their industry to be 0.19 percentage points higher, and for wages to rise by an extra 0.28 percent. The launch of the BoE's Funding for Lending Scheme, which offered banks cheap credit, and European Central Bank President Mario Draghi's promise in July 2012 to "do whatever it takes" to preserve the euro also affected firms' price expectations. BoE Governor Mark Carney's words proved less powerful, with little effect on firms' inflation expectations from his 2013 policy of forward guidance, under which he said interest rates would not rise before the jobless rate dropped. "The effect of the MPC's forward guidance is not statistically significant," the research said. Weale opposed forward guidance at its launch - albeit because he feared the policy had insufficient checks against inflation getting out of control. Weale joined the MPC in 2010 and will step down next month after serving two terms as an independent external member. His co-authors were Lena Boneva, James Cloyne and Tomasz Wieladek. The research measured firms' inflation expectations by using data from Confederation of British Industry quarterly surveys. Previous studies found QE gave a moderate boost to British consumer price inflation, bond prices and economic output. -Reuters