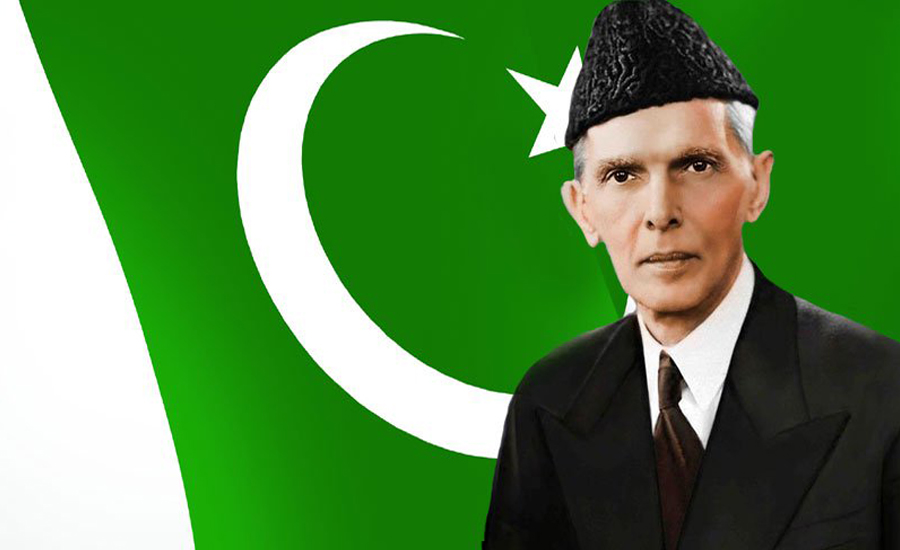 LAHORE (92 News) – The nation is celebrating the 143rd birthday anniversary of Founder of Pakistan Quaid-e-Azam Mohammad Ali Jinnah with national zeal and fervour. The nation celebrates birth anniversary of Quaid-e-Azam on Tuesday (today) with renewed commitment to work hard for progress and prosperity of the country. It is a public holiday today and the national flag is hoisting atop all public and private buildings. An impressive change of guard ceremony was held at Mazar-e-Quaid in Karachi on Tuesday morning. A smartly turned out contingent of Pakistan Military Academy Kakul assumed the guards' duty from Pakistan Air Force. People from various walks of life will aslo visit the mausoleum of Quaid-e-Azam to pay homage to the founder of Pakistan. Several government departments, political, social, academic and literary organizations will hold special ceremonies to mark Quaid-e-Azam’s birthday in a befitting manner. In their separate messages on the day, President Dr Arif Alvi and Prime Minister Imran Khan have called for adhering to the vision of Quaid-e-Azam Muhammad Ali Jinnah and following his guiding principles of unity, faith and discipline in our individual as well as collective lives. President 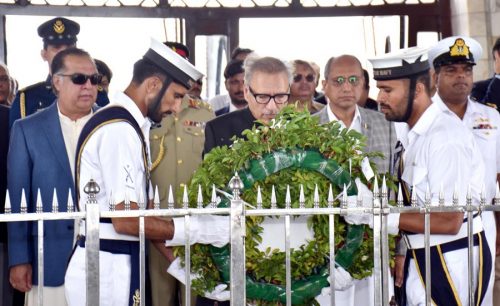 In his message to the nation, on the occasion of Quaid’s birth anniversary, President Dr Arif Alvisaid that it is a day for the entire nation to rejoice its commitment to the ideals of democracy, egalitarianism, constitutionalism and rule of law which were upheld by our great leader throughout his life. “Quaid-e-Azam united the discordant Muslims of the sub-continent, welded them into a nation and secured a separate and independent homeland for them where they could spend their lives in accordance with their own custom and their traditions,” the president said in his message on the occasion. Jinnah’s vision and thoughts are as relevant today as they were seven decades ago, he added Prime Minister Meanwhile, Prime Minister Imran Khan on the occasion has urged the nation to rededicate themselves to the vision of the founding father. “Our Quaid had envisioned a state where we could live and breathe as free men, where we could enjoy freedom from fear and want; where we could fashion our lives according to our religious and cultural values, and where the principles of State of Madina could be followed to create a just and prosperous society,” the premier said in his message on Jinnah’s birth anniversary. Prime Minister added that Jinnah had wanted a society where every citizen enjoys the privileges of equal rights; where rule of law reigns supreme and establishment of a state which provides its umbrella to marginalised and vulnerable and also facilitates the growth of every individual to his or her full capabilities. “The best way to pay homage to our Quaid is to adhere to his vision and follow his guiding principles of unity, faith and discipline, in our individual as well as collective lives, towards making our country a true welfare, progressive and prosperous state,” PM Imran Khan said. In his message pertaining to Quaid-e-Azam’s 142nd Birth Anniversary, Law minister Barrister Dr. Muhammad Farogh Naseem said today is the day to commemorate life and struggle of our great leader and Founder of Pakistan, Muhammad Ali Jinnah. He said as a result of the leadership and untiring efforts of Quaid-e-Azam, the Muslims of subcontinent achieved a homeland of their own. Naseem said the Quaid's vision of a tolerant society, protecting the rights of people of all religions, ethnicities and castes and his principles of unity, faith and discipline can lead us to build the Pakistan he envisioned.