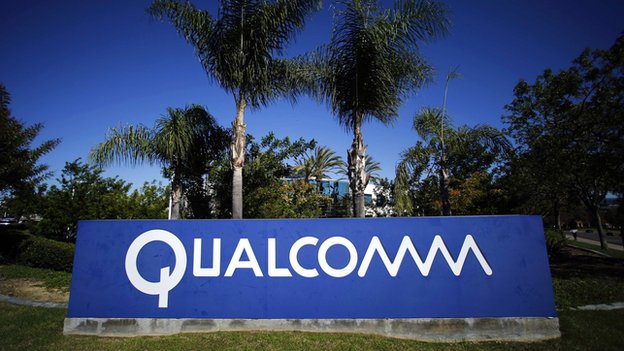 US chipmaker Qualcomm will pay $975m (£640m) to Chinese authorities to end a 14 month anti-trust investigation into its patent licensing practices. The fine is the largest in China's corporate history and will require the firm to lower royalty rates on patents used in China's mobile phone market. The move could help Chinese smartphone makers Xiaomi and Huawei. Qualcomm said on Monday it would not contest the ruling that it violated China's anti-monopoly law. "Although Qualcomm is disappointed with the results of the investigation, it is pleased that the NDRC (National Development and Reform Commission) has reviewed and approved the company's rectification plan," the tech giant said in a statement on Monday. Stake in China: The firm, which is the biggest supplier of chips used in smartphones, will now charge royalties based on 65% of the selling price of phones in China, instead of on the entire price. China's expanding high-speed 4G network is driving demand in the world's largest smartphone market, where Qualcomm as a key player. The chip giant made about half its global revenue of $26.5bn in China in its last fiscal year. News of the agreement sent the company's New York listed shares up 2.8% in after-hours trading. The firm also increased its profit and revenue forecast for the current fiscal year. Chief executive Steve Mollenkopf said he was pleased the resolution had removed "uncertainty" surroundings its business in China. "We will now focus our full attention and resources on supporting our customers and partners in China and pursuing the many opportunities ahead," he said. (Web Desk)