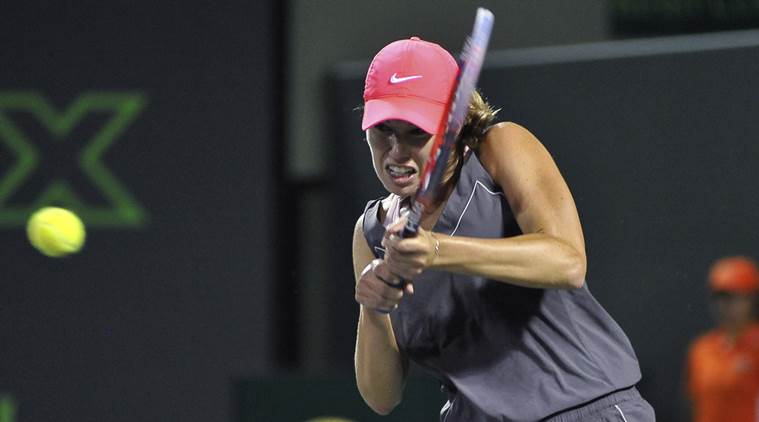 FLORIDA (Reuters) - Qualifier Danielle Collins overpowered her childhood idol Venus Williams 6-2 6-3 in a stunning quarter-final upset at the Miami Open on Wednesday. Collins, belying her 93rd ranking, pounded winner after winner to beat fellow American Williams at her own game and set up a semi-final against French Open champion Jelena Ostapenko. Latvian Ostapenko overpowered Ukrainian fourth seed Elina Svitolina in two tiebreaks to win 7-6(3) 7-6(5) in an afternoon match to reach the Miami semis for the first time. Thursday’s other semi will pit American 13th seed Sloane Stephens against unseeded Victoria Azarenka of Belarus. Collins played with manic intensity against eighth seed Williams, repeatedly going for broke with groundstrokes that painted the lines and ran her opponent ragged around the Crandon Park centre court. “The first time I saw Venus in the locker room I nearly cried,” Collins said in an on-court interview. “I’ve idolised her my whole life. She’s been my favourite player for forever and this is just a special moment I’m trying to wrap my head around it.” The 24-year-old is finally finding her feet at the highest level, as she showed by keeping the pressure on Williams with victory in sight. “She’s been in a lot of situations where she’s been down and come back. I knew I was going to really have to work for it and she wasn’t going to give it to me,” Collins said of the 37-year-old seven-times grand slam champion. “I’m just starting to finally put all of the pieces together.” Earlier, sixth seed Ostapenko was far from her best in her quarter-final, spraying the court with 44 unforced errors and having her serve broken six times on a windy day. Yet the 20-year-old’s aggressive approach, stepping into the court to take Svitolina’s second serves early and targeting the lines with her powerful backhand, paid off in the match’s biggest moments. After Svitolina saved three consecutive match points in the second set tiebreak, Ostapenko hammered her 41st winner, a crosscourt backhand, on match point to end the nearly two hour contest. Ostapenko said she followed coach David Taylor’s advice to stay on the attack against the defensive-minded Svitolina even when she was having trouble with her accuracy. “When David came on the court he was telling me to keep playing aggressive, to go for the shots,” Ostapenko said on court. “Even if you are missing you have to play aggressive,” she said. “I’m just trying to fight for every point and be more consistent and I think I’m getting there in my form.” Ostapenko has now won both of her meetings against Svitolina, included a victory over the 23-year-old at Wimbledon last year.