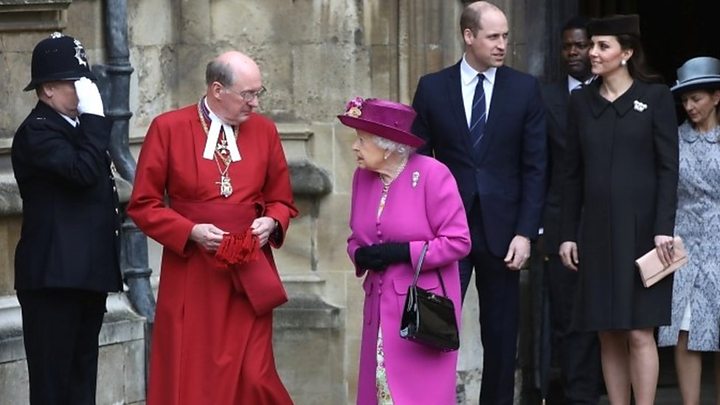 LONDON (Reuters) - Britain’s Queen Elizabeth attended the traditional Easter service at Windsor Castle on Sunday, joining other members of the Royal family at St George’s Chapel, where her grandson Prince Harry is due to marry Meghan Markle next month. The British monarch, wearing a purple hat and coat and a floral dress, was greeted at the chapel by the Dean of Windsor David Conner, who will conduct the wedding service on May 19. She was joined by her oldest grandson, Prince William and wife Kate, who is due to give birth to the couple’s third child this month, and other members of the royal family. The queen’s 96-year-old husband Prince Philip was absent from the service, as were Harry and his fiancee. Philip pulled out of the Royal Maundy Service at Leicester Cathedral in central England on Thursday because of a hip problem, according to a royal source. Queen Elizabeth, who will turn 92 on April 21, was presented with a posy of flowers when she left the service at her residence in the town located to the west of London. Earlier on Sunday, Kensington Palace said the prince and Markle and had chosen a London florist beloved of the fashion industry to arrange the flower decorations for their wedding.