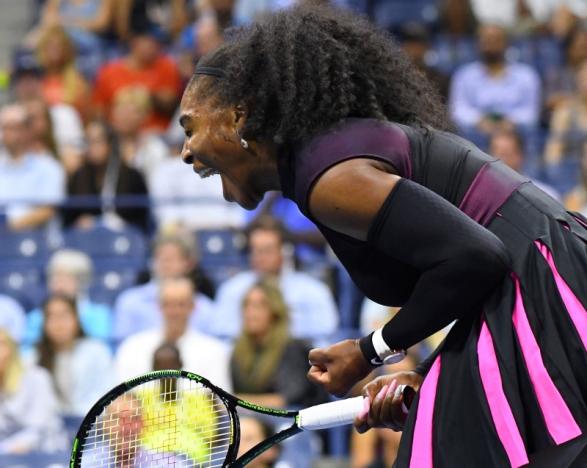 NEW YORK - After 17 trips to Flushing Meadows and six US Open titles Serena Williams did something on Thursday she had never done before -- win a match indoors. With the new high-tech retractable roof over Arthur Ashe Stadium slammed shut because of persistent rain, Williams swept past American compatriot Vania King 6-3 6-3 in a tidy 65 minutes to ease into the third round. "It was a little different playing with Ashe closed but it still feels great," said Williams. "It's very, very loud out there. "It's definitely different because everywhere you play is really quiet. Here it's super loud." Indoors or outdoors, night or day, rain or shine, it has made little difference to Williams at the US Open, the 34-year-old having now racked up 86 victories at Flushing Meadows. Williams's victory against an over-matched King may have been one of her easiest, the world number one in complete control from the outset, looking like a champion who never had to shift out of first gear. Despite the one-sided match, Williams was extremely critical of her performance, convinced it should have been better. "I just think it should have been a different scoreline for me," said Williams. "I feel like I made a lot of errors but there's nothing I can do about that now. "What really matters is I got the win." Williams arrived at the year's final grand slam with concerns swirling around a sore shoulder that hampered her at the Rio Olympics and forced her to pull out of a tournament in Cincinnati. But she put any doubts about her fitness to rest, blasting 13 aces past King while hitting 38 winners to just four by her opponent. "It's stable, I just got to keep it like that," Williams said of her right shoulder. "It's two matches in and usually you want to be able to play seven matches "I definitely want to keep it as good as it can be." It seems every year history beckons Williams at Flushing Meadows and on Thursday she reached yet another milestone by tying Martina Navratilova for most career grand slam wins with 306. There are other marks well within the American's grasp during the fortnight. A seventh US Open title would move her past Chris Evert for the most in the Open Era. It would also be her 23rd grand slam win, moving her past Steffi Graf, again for the most in the Open Era, one shy of the great Margaret Court who tops the all-time list with 24. -Reuters