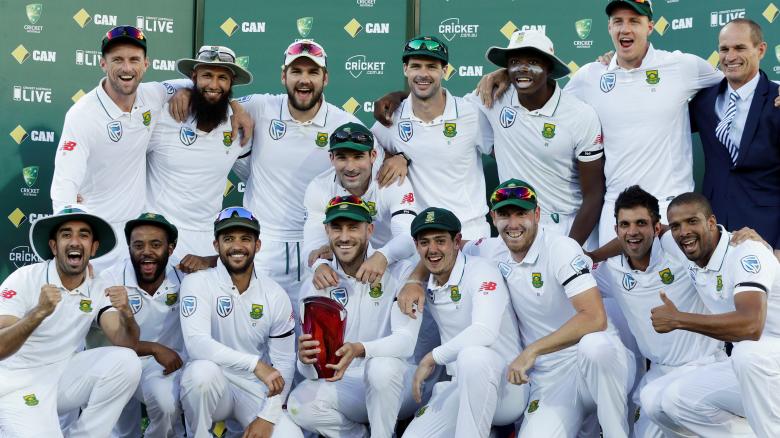 SYDNEY - Australia's new-look side delivered the minimum required with a victory over South Africa in the dead rubber third test but there was understandable caution about proclaiming it the dawning of a new era Down Under. The Australians axed half their team and brought in three new caps for the day-nighter in Adelaide after losing the series in an innings and 80-run defeat in Hobart, a fifth straight test loss that left captain Steve Smith 'humiliated'. But although Smith lauded the "fight, resilience and character" shown by the team on Sunday, it was a masterful innings from a 29-year-old batsman who made his debut five years ago that laid the groundwork for the seven-wicket victory. [nL4N1DS02X] Usman Khawaja's 145 was his country's only century of the series and finally gave the undoubtedly world class pace duo of Mitchell Starc and Josh Hazlewood something to bowl at. New cap Peter Handscomb hit a maiden half century in the first innings and the winning run in the second, while 20-year-old opener Matt Renshaw, who had gritted out an unbeaten 34 from 167 balls, was at the other end when the victory was clinched. Middle order batsman Nic Maddinson failed to score a run in his maiden innings and the recalled Jackson Bird took 3-111 in a solid, if not spectacular, outing as the third seamer. Matt Wade, also recalled, raised the decibel levels behind the stumps but made four runs with the bat as his predecessor as wicketkeeper, Peter Nevill, made a point of his own with 179 not out for New South Wales in the Sheffield Shield. With a three-test home series against Pakistan coming up next month, a trip to India early next year and a home Ashes series in 12 month's time, it looks highly likely the selectors will stick with their hand in the short-term. After Hobart, coach Darren Lehmann said only Smith, opener Dave Warner and the two pace spearheads were assured of their places in the side. To that quartet must now be added Khawaja, who has been recalled and discarded with regularity over the last five years. Often criticised for his diffidence in a team culture where the pugnacious Warner is offered as the template, the elegant lefthander's seven-hour epic was proof that there is more than one way to show character on a cricket pitch. As far as South African skipper Faf du Plessis was concerned, Khawaja's knock was the difference between the team that lost the first two matches and the one that won in Adelaide. "Hundreds is what changes games for you," he said. "And that will be the challenge for the Australian team going forward. If they can do that, they will be a good team." -Reuters