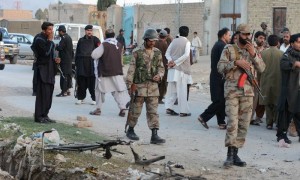 QUETTA (92 News) – Frontier Corps (FC) on Sunday arrested at least three terrorists from district Naseerabad. According to FC spokesperson, the arrests were made while conducting a search operation. "The FC also confiscated huge cache of weapons which include rocket launchers, LMGs, commonitions, magazine pistols among others," he said. "The nabbed terrorists have been shifted to undisclosed location for interrogation." The FC acted on information that planning is underway for terrorist attack in Goth Faiz.