KARACHI (92 News) – Quetta Gladiators hope their in-form opener Shane Watson will make them third time lucky as they look to avoid another knock-out punch from a spirited Peshawar Zalmi when the two teams clash in the sell-out final of the Pakistan Super League at the National Stadium on Sunday. The match will start at 8pm, but the closing ceremony will begin at 6pm. Quetta have beaten Peshawar in both the league games this season, before having the better of their arch-rivals in the Wednesday’s qualifier at the back of a powerful performance, but they are wary of a knock-out punch from the Daren Sammy-led Peshawar. Despite beating Peshawar in the qualifiers in 2016 and 2017 in thrilling last-over finishes by one-run, Quetta lost in the 2017 final by 58 runs in Lahore and in the Eliminator 1 last year. Quetta captain Sarfaraz Ahmed hoped it will be a case of third time lucky. “We are playing the final for the third time, so we will do our all-out effort to play in the same manner which we have done in the whole tournament,” Sarfaraz told a news conference on Saturday. “If you look at the previous years, there were some factors which hurt us as some players didn’t come,” said Sarfaraz of the Lahore final when Kevin Pietersen and Rilee Rossouw were not available. 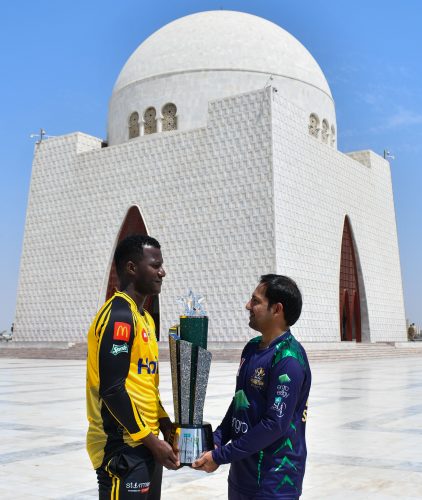 Last year, Watson decided to stay away for the Eliminators in Lahore, leaving Quetta depleted. But this time Watson, who has amassed 423 runs in the tournament, made a late decision to visit Karachi. “This time, we are at our full strength, so we will do our best to play like we have done and win the tournament. Obviously, winning the trophy is every captain's wish. We have come close, but were not able to win. This time, we will do our best, though we have a strong team against us.” It is befitting for the Pakistan Super League final that the two most in-form teams are in the final, finishing with seven wins and three losses each in the first phase. Peshawar skipper Sammy admitted Watson has plagued his team. “Shane Watson has really been the pain for us,” said Sammy of the former Australia opener, who has 265 runs at 66.25 in five matches against Peshawar in two years. “He is pretty experience and he is enjoying his form.” But Sammy hoped his team will give another knock-out punch. “Quetta has had the better of us throughout the season and I always tell my boys that everything in life happens for a reason. If it is one time we chose to beat them, whey not in the final when it really matters. “Hopefully, it’s a cracker of a game and we find ways and means to execute our plans against them and we will need that but that Shane Watson guy is pain for us.” Quetta have mostly chased targets and their two wins against Peshawar came by six and eight wickets, respectively before they had the better of their rivals by 10 runs in the play-off in Karachi. Sarfaraz said he was looking for a good platform from his top-order. “Watson and Umar Akmal are quality players. Watson has played well throughout the tournament and is in-form and it’s good that a top player like him is with us and we are at full strength. We also have Rilee Rossouw, Ahsan Ali and Ahmed Shahzad, so if our top players give the platform, then we will put a good total against the opposition who have a strong bowling line-up.” Besides Watson, Umar (277 runs in 11 matches), Rossouw (256 in 10 matches) and Shahzad (253 in seven) are in good nick. Peshawar are more reliant on Kamran Akmal, who Sammy described as his “match-winner”, having knocked off 336 runs in 12 games. Fellow-opener Imam-ul-Haq has justified his selection with 338 runs in 11 matches. They put on 135 to set the platform for an imposing 214 for five against Islamabad, helping their team to a 48-run win. Peshawar also has powerful pace attack, led by tournament's highest wicket-taker Hasan Ali who has 25 wickets in 12 matches. Experienced pacer Wahab Riaz has 16, followed by Sameen Gul (10), and Tymal Mills and Umaid Asif (seven each). But Quetta’s spinners – Mohammad Nawaz and Fawad Ahmed – make the difference with wickets in the middle overs. Peshawar are unable to accommodate their spinner Liam Dawson. Sarfaraz admitted Fawad Ahmed is doubtful after being hit on the mouth in the Qualifier against Peshawar, which needed a surgery. Sammy hoped it will be another crackers of a game before a sell-out crowd. “I like to be the underdogs,” said Sammy. “To be fair, Quetta are playing some good cricket. The key for us is that our bowling unit has pretty much been the same. Hasan has been playing since his debut and Wahab leading the pack and sharing his experience. “We have some good players, not superstars but effective players. To be able to make three consecutive finals in a row is an achievement. “Winning the final tomorrow will really be the icing on the cake.” Fixture: FINAL - Quetta Gladiators v Peshawar Zalmi –  Sunday, 17 March, 8pm. Ranmore Martinesz and Ahsan Raza (on-field umpires), Shozab Raza (third umpire), Rashid Riaz (fourth umpire) Roshan Mahanama (match referee).