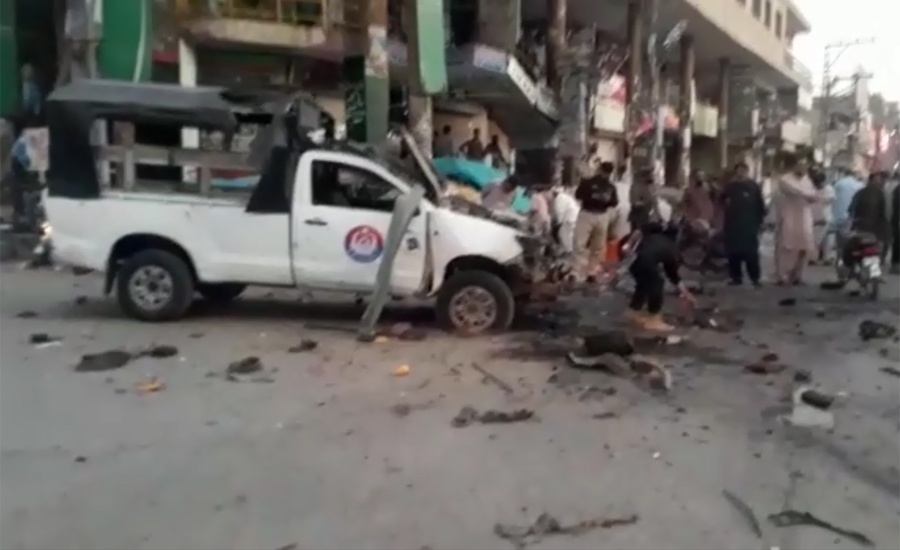 QUETTA (92 News) – A first information report (FIR) of yesterday’s Quetta blast near a vehicle of the security forces at Meezan Chowk was lodged in the Counter-Terrorism Department (CTD) police station. According to the details garnered, the case was filed by the complainant of against the unidentified men. However, Charges of murder and terrorism have been included in the case. 92 News acquired the CCTV footage of the blast. Earlier, five people, including a policeman, were killed and 32 others injured in a blast near a vehicle of the security forces at Meezan Chowk. Three of the injured have been shifted to Civil Hospital. Law enforcement agencies have reached the site and cordoned off the area. According to the preliminary report, 5-6 kilograms of explosives were used in the blast. The condition of six injured is stated to be critically. Meanwhile, Prime Minister Imran Khan has expressed grief over profound loss of precious lives in the blast. On July 23, eight people including five policemen were martyred and 22 others were injured in two ‘linked to each other’ acts of terrorism in Dera Ismail Khan on Sunday. Two unidentified assailants, who were riding a motorcycle, opened fire on on-duty policemen at Kotla Saidan check-post on Daraban Road. The firing left two police constables fatally wounded. Following the firing incident, a suspected female suicide blast outside the emergency ward of the district hospital left three policemen and as many civilians martyred while 22 others wounded. The bomber blew herself up soon after the dead bodies of policemen, who were attacked at the check-post, were brought to the district hospital by their fellow policemen. According to District Police Officer D I Khan Saleem Riaz, the two incidents were related to each other and the prime targets were to attack police force. It is noteworthy that a number of terrorists attacks are increasing now a days from previous month. This is second blast within a month in Quetta.