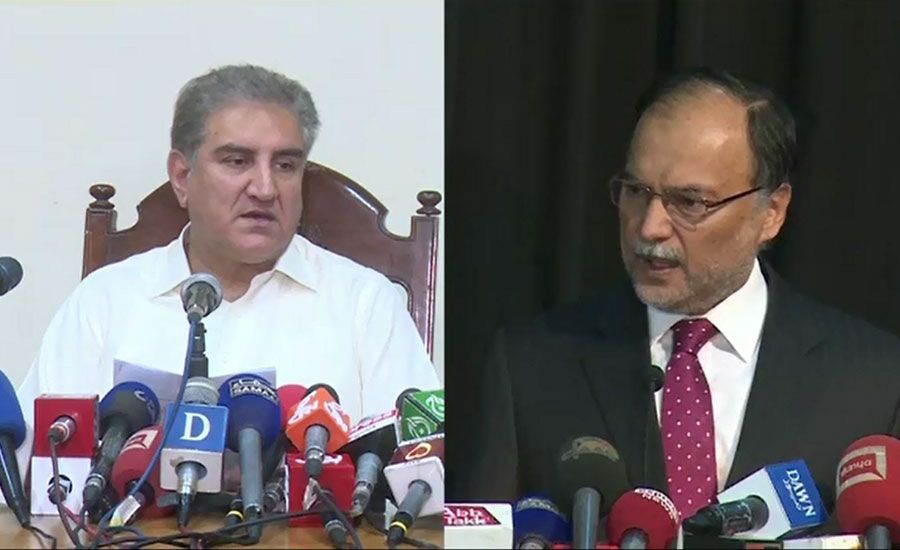 ISLAMABAD (92 News) – Pakistan Muslim League-N (PML-N) Secretary General Ahsan Iqbal has said that Foreign Minister Shah Mehmood Qureshi is fooling people on the name of South Punjab on Wednesday. Strongly responding to the presser of Shah Mehmood Qureshi, Ahsan Iqbal said that the PML-N had already presented a bill in the National Assembly for the formation of the South Punjab and Bahawalpur provinces. He also mentioned that this bill was opposed by the Pakistan Tehreek-e-Insaf (PTI). The former interior minister further said that the PML-N bill was already with the standing committee, calling on Qureshi to look into this matter immediately. “Shah Sahib should not deny the record of the National Assembly,” he termed.

Earlier today, addressing a press conference in Multan, Shah Mehmood Qureshi said that the PPP had given a positive reply regarding the province. He has said that a majority of the Pakistan Muslim League-Nawaz (PML-N) is in favor of the South Punjab province.

FM Qureshi said that the PTI had already introduced a constitution amendment in the National Assembly for this purpose as per its promise. “We require a two-thirds majority to pass this amendment,” he said. He said that the new province will consist of Multan, Bahawalpur and Dera Ghazi Khan divisions. “The issue of South Punjab is moving ahead practically. We will take the matter ahead in consultation with other parties,” he said. Qureshi said that the South Punjab Assembly will have 120 seats keeping in view the population of these divisions. “An amendment has to be made in the Articles 1, 51, 59, 106, 198, 218 for creating a new province,” he said. He said that South Punjab will be given representation in the Senate. “Seats will also be distributed on the basis of population,” he said. The minister said that a High Court will also be established after the creation of South Punjab and its centre will be Multan.

The National Assembly passed the Constitutional Amendment Bill to create South Punjab province with a majority.

However, the opposition seemed to be divided over the bill. It was moved by Makhdoom Syed Samiul Hassan Gillani.

The PML-N members protested against the bill by standing on their desks, while the PPP remained silent. Speaking in the National Assembly, Foreign Minister Shah Mahmood Qureshi invited the PPP to join hands to bring a common bill. “Some powers are against the China Pakistan Economic Corridor (CPEC) and such powers hamper economic progress. Likewise, hurdles were created in the atomic program of the country,” he said. The minister paid tribute to the security guard martyred in Gwadar. “The enemies of Pakistan will be defeated.”