Radwanska falls to teenager Konjuh at US Open 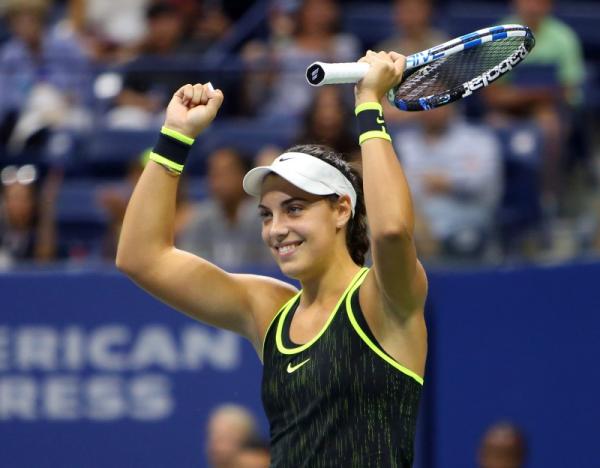 Radwanska falls to teenager Konjuh at US Open

NEW YORK - Croatian teen Ana Konjuh avenged a Wimbledon loss with a stunning 6-4 6-4 upset of fourth seed Agnieszka Radwanska to claim the last women's quarter-final spot at the US Open. The 18-year-old, who won the 2013 US Open juniors title after claiming the Australian Open juniors crown, lost her first service game but did not yield serve again in an overpowering performance that belied her world ranking of 92. She cracked 38 winners, including six aces, against the Pole, who has never gone beyond the round of 16 in five attempts at Flushing Meadows. The power-hitting teenager, who became the first Croatian woman to reach the quarter-finals at a US Open, was spurred on by a second-round loss to Radwanska at Wimbledon, where she held three match points before falling 9-7 in the third set. "It's been an incredible night," Konjuh said in an on-court interview. "This time I got revenge, so I'm really happy." Radwanska accepted she had been outplayed by her opponent. "Sometimes it is difficult when the ball is going really big from the other side. It's hard to control, really put the ball where you want," said Radwanska. Konjuh said she used the Wimbledon loss as motivation. "Last night I was replaying the match in my head," she told reporters. "I had match points and I missed forehands on all of them. I just didn't go for it." The Croat refused to make that mistake again, earning the only break of the second set with a backhand winner in the ninth game to lead 5-4 and serving for a quarter-finals berth. At 15-0, she tossed the ball for her serve as an electronic shriek of feedback noise filled Arthur Ashe Stadium. She gasped in surprise, calmly collected herself and carried on to victory when Radwanska could not return her final serve. "I'm real excited about my performance tonight," said Konjuh, who dealt with back and ankle injuries this season that sidelined her for a couple of months. "This time I took opportunities. I was just going for it." Hitting with heavy power from both flanks and registering as high as 118 mph with her serve, Konjuh was too strong for Radwanska, who was only able to answer with nine winners of her own. The victory lifted Konjuh to a last eight match against 10th-seeded Karolina Pliskova of the Czech Republic, who overcame sixth-seeded American Venus Williams 4-6 6-4 7-6(3) to advance. -Reuters