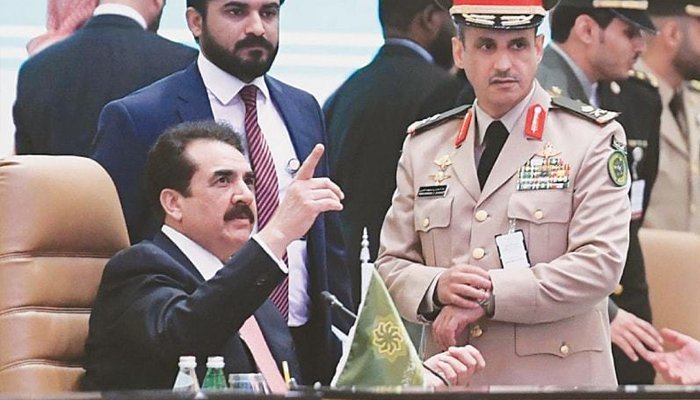 ISLAMABAD (92 News) – A delegation of Islamic Military Counter Terrorism Coalition (IMCTC), headed by former army chief General (r) Raheel Sharif, arrived in Islamabad on Sunday. It is pertinent to mention here that the delegation reached in Pakistan on it’s first-ever visit to the country. A special plane carrying the delegation arrived at Nur Khan air base in the federal capital. According to the reports, the two-day-long visit is considered to hold strategic importance under current circumstances. The visiting delegation is likely to hold key meetings with the civil and military leadership of the country. During the meeting, Yemen’s situation and visit of Saudi crown prince will be discussed. The delegation will return to Saudi Arabia on Tuesday. Meanwhile, the military officials are expected to meet Senate Chairman Sadiq Sanjrani and Foreign Minister Shah Mehmoood Qureshi besides Chief of Army Staff (COAS) General Qamar Javed Bajwa and Joint Chiefs of Staff Committee General Zubair Mahmood Hayat.

Raheel Sharif says military coalition not against any sect

On Dec  19, 2018, Raheel Sharif assured Senate Chairman Sadiq Sanjrani that the Saudi-led military coalition was not aimed at any country, nation or sect. Senate delegation led by Chairman Sadiq Sanjrani visited to the Islamic Military Counterterrorism Coalition (IMCTC) headquarters in the Saudi Arabian capital, Riyadh. The Senate chairman met with Raheel Sharif who is currently commander general of Saudi Arabia-led multi-nation Islamic Military Counter Terrorism Coalition (IMCTC). During the meeting, the former army chief briefed the Senate delegation about the performance and aims and objectives of the military alliance. “The Islamic military coalition was not formed to take action against any country, nation or sect,” Raheel Sharif said. “The primary objective of this institution is to counter terrorism and eliminate it,” he added. The senators lauded the resolve and efforts of the Saudi king and government to end terrorism in the meeting. Earlier, the Senate delegation was welcomed to the IMCTC headquarters by Sharif, the coalition’s commander, and General Abdul Rehman, the deputy commander. It is pertinent to mention here that Saudi Arabia had acquired the services of Gen (r) Raheel as head of the IMCTC cobbled together in December 2015.