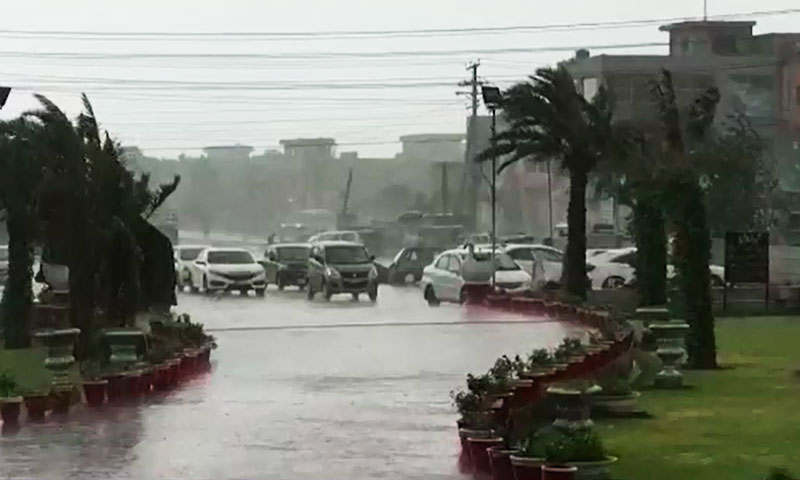 LAHORE (92 News) – Rain brought respite for people from heat in different cities of Punjab, including Lahore on Monday. The rain brought the mercury down in different cities across the country. Lahore, Murree, Faisalabad, Okara and Azad Kashmir all received rain Sunday night. In Lahore, heavy rain with strong winds lashed the city on Monday morning, leaving streets flooded. Weather turned pleasant after light rain in Lahore. Thick clouds also continued to hover in the city. In Faisalabad, Rawalpindi, Multan and the residents of other cities residents experienced a storm and rain. Multiple areas in Azad Kashmir were hit by rain, while showers in North Waziristan and Dir led to drains and canals flooding. The Pakistan Meteorological Department (PMD) has forecast 24 more hours of rain. Karachi is expected to receive monsoon showers from July 1, according to the department. Currently, the temperature in the metropolis is expected to continue.

Earlier, the Pakistan Meteorological Department (PMD) has issued mild heatwave alert for Karachi. As per details, the mild hot weather conditions are likely to occur for three days, said Pakistan Meteorological Department. Maximum temperature, during the heatwave period, will remain at 41°C. The medical experts have advised people to take precautions in order to keep themselves safe from the heatwave. People should avoid going out from their homes and offices unless important and keep a wet handkerchief at all times. On the other hand, rain lashed different cities across the country.