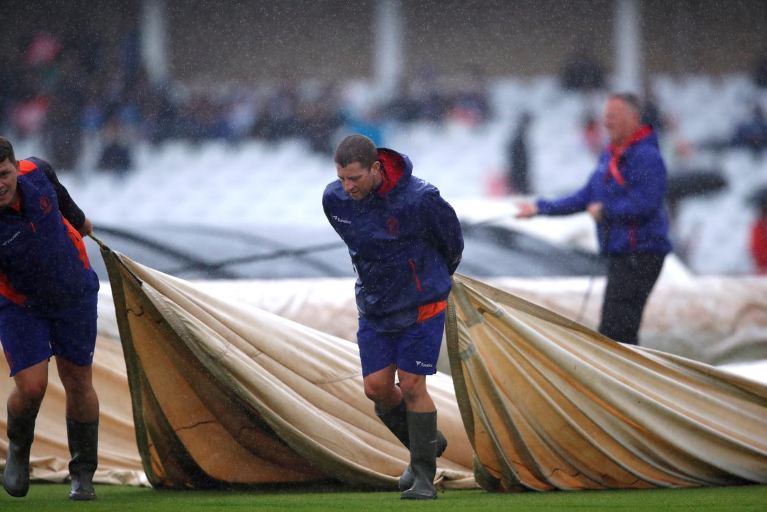 LONDON (Reuters) - Lost revenues from a record number of rain-hit cricket World Cup games in England and Wales may result in insurance claims of a few million pounds for each abandoned fixture, insurance sources say. Broadcasters, organisers, venues, advertising sponsors and catering establishments are among firms to have missed out after four matches were called off in an exceptionally rainy June. Due to the hectic nature of the tournament, which features 48 one-day matches between May and July, finishing on July 14, there is no opportunity to reschedule, except for the semi-finals and final. Companies typically buy contingency, or cancellation, insurance for sporting events, which covers everything from rain stopping play to terror attacks. Lloyd’s of London insurer Beazley estimated, for example, that the football World Cup in Russia in 2018 was insured for more than $10 billion (£8 billion), including cover for property damage and cyber breaches, as well as cancellation. Insurers say cover for the less-popular cricket equivalent will be much lower. Star India has the global media rights for the cricket tournament but has licensed further rights to sports broadcasters in other countries. However, it is likely to have lost at least £1 million for each abandoned match, insurance specialists estimate, as it gains huge advertising revenue in India for a popular sport in a nation of more than one billion people. Star India did not respond to requests for comment. There are 123 advertising spots for broadcasters in a World Cup match, after each of the 100 overs and 20 wickets and during refreshment breaks, said Jonathan Ticehurst, a director at Lloyd’s of London insurance broker Bishopsgate, who has arranged insurance for previous cricket World Cups. Broadcasters buy contingency insurance, as “in the event of no play, they are not able to charge” the advertisers, he said.

The fixtures, several of which were sold out, also attracted ticket sales of at least a few hundred thousand pounds each, with larger games likely attracting sales of more than a million pounds, based on Reuters estimates. Spectators get all their money back if no ball is bowled, or if the game is abandoned after a small amount of play. The England and Wales Cricket Board (ECB), which gets the revenue from the ticket sales, said it had an insurance policy against matches being called off, but declined to comment further. Star India likely took out contingency insurance from Indian insurers, but reinsurance may have been provided by the specialist Lloyd’s of London market, insurers said. Reinsurers share the burden of large losses with insurers, in return for part of the premium. The ECB will likely also have bought insurance from the Lloyd’s market, along with county teams whose grounds were booked for the rained-off matches, industry sources said. The local teams will buy insurance against lost sales from the venues’ bars and restaurants, sources said. But insurers may also have required clients to bear the losses themselves for one, two or even three abandoned games, specialists said. At four matches, they are likely to be able to claim insurance, if not before. “Insurers probably looked at the calendar and reckoned you would not go through the whole World Cup without two or three games being rained off,” said one underwriter. “They will probably charge a two-game or three-game excess.” The four abandoned matches were all at smaller venues. An abandoned match at a bigger ground in London, Birmingham or Manchester over the remaining 3-1/2 weeks of the tournament would have an even greater financial impact, insurers say.