ISLAMABAD (92 News) – Rain hit different towns and cities of the Punjab, including Lahore, on Saturday. In Peshawar, strong winds and scattered rains caused decrease in the mercury level, making weather pleasant. Rain-thundershower with windstorms/gusty winds occurred at few places of Punjab. People came out from their houses to enjoy the weather. The families among children are visiting the tourist places and the restaurants. Islamabad, Faisalabad, Bahawalnagar and several cities in Khyber Pakhtunkhwa received rain. Rainfall recorded as five mm in Peshawar and 30mm in Parachanar during the past four hours. 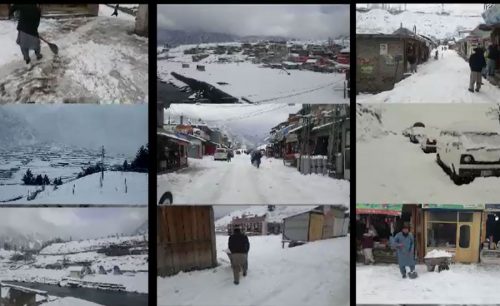 On the other hand, snowfall continued in Murree, Galiyat, Abbottabad, Gilgit-Baltistan,Sawat and adjoining areas, dropping down the mercury considerably. The northern areas, including Nathia Gali, Ayubia, Neelum Valley, Leepa, Shogran and Naran, continued to received snowfall.Snowfall in murree is recorded as 10 inches. Miranshah received snow after 12 years. Owing to snowfall, people were restricted to their homes. Snow created difficulties for local residents, especially those residing in rural areas. All roads leading to the snow-covered resort were blocked. The Pakistan Meteorological department forecasts that the current spell of rainfall and snowfall will be continued to next two days.