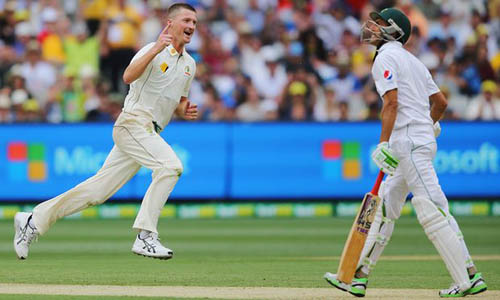 MELBOURNE - Pakistan were 142 for four wickets when rain stopped play before tea on day one of the second test against Australia in Melbourne on Monday. Azhar Ali was unbeaten on 62, with Asad Shafiq on four not out at the Melbourne Cricket Ground. Australia lead the three-match series 1-0 after winning the opener in Brisbane by 39 runs. Pakistan captain Misbah-ul-Haq won the toss and elected to bat in the second test against Australia in Melbourne on Monday. Australia won the first test by 39 runs in Brisbane and bring an unchanged side to the Melbourne Cricket Ground where they will bid to seal the three-match series with a game to spare. Pakistan have lost four tests in succession but arrived in Melbourne upbeat after scoring the highest ever fourth innings total in Australia to give the home side a huge scare at the Gabba. They made one change, with right-arm paceman Sohail Khan replacing left-armer Rahat Ali. The MCG wicket had a covering of grass before the opening session but the pitch is likely to dry out quickly with hot weather in the opening days. -Reuters