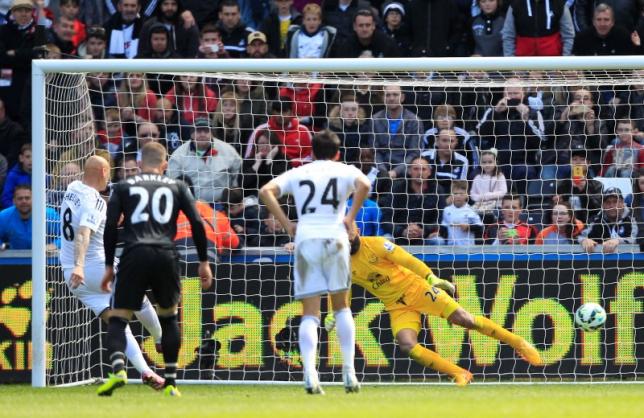 LONDON - Arsenal's improbable late run at the Premier League title gained momentum with a 1-0 victory at struggling Burnley on Saturday, an eighth straight triumph that moved them within four points of leaders Chelsea. Arsene Wenger's side did not have to be at their best to overcome an organised Burnley side who remained second from bottom. The visitors scored early through Aaron Ramsey and then eased through largely unthreatened. While Chelsea, who visit Queens Park Rangers on Sunday, have two games in hand, Wenger's side host the leaders in two weeks knowing victory could spark an attack of the jitters at Stamford Bridge. Elsewhere, Aston Villa beat Tottenham Hotspur 1-0 with a goal from Christian Benteke while Jamie Vardy netted in stoppage time to secure a 3-2 win at West Bromwich Albion for bottom club Leicester City. It was a miserable afternoon for Sunderland who were thrashed 4-1 at home by Crystal Palace with Yannick Bolasie scoring a 12-minute hat-trick. Hull City were beaten 2-0 at Southampton. Leicester are on 25 points but have a game in hand on most of their relegation rivals. Burnley and QPR, who have six matches left, are on 26 points, Hull have 28, Sunderland 29 and Villa 32. The day's other games between Swansea City and Everton and West Ham United and Stoke City ended in 1-1 draws. Arsenal trailed Chelsea by 13 points in January but have put together a remarkable run of results that has lifted them on to the shoulders of their London rivals. Wenger's team were ruthless in their demolition of Liverpool last weekend and were more workmanlike as they dismissed Sean Dyche's battle-hardened strugglers. DESPERATE CHALLENGES The goal arrived in the 12th minute when Ramsey shot high into the net from close range after a series of Arsenal efforts had been blocked by desperate Burnley challenges. Arsenal have produced their best run of form since they enjoyed a nine-match winning streak on the way to their last title in 2004 but Wenger has downplayed the importance of this month's clash with the leaders. "I don't think our game against Chelsea will decide the title," he told the BBC. "They have two games in hand and we have to just keep going. "We have promised ourselves to do as well as we can until the end and then we will see where we stand." Villa took another step towards safety after Benteke's first-half header sank Spurs as manager Tim Sherwood enjoyed a winning return to his former club. The visitors, who moved up to 15th, are six points clear of the relegation zone and one place and three points above Sunderland whose battle to avoid the drop suffered a damaging blow. Murray made it six goals in six games for Palace with a powerful far-post header three minutes after the break before Bolasie's superb treble, the second of which was a beautiful chip into the far corner, ended the contest. The relegation battle remained a congested dogfight after Leicester continued their escape bid at West Brom, whose celebrations of 'Astle Day', in memory of former striker Jeff Astle, were spoiled. Wearing an all-white kit to match the one they wore in the 1968 FA Cup final when Astle scored the only goal, West Brom twice took the lead before Vardy fired a low shot across Boaz Myhill to win the game. Graziano Pelle struck his first goal in 15 games for Southampton, who moved up to fifth on 56 points, two ahead of Liverpool and five behind fourth-placed Manchester City who take on Manchester United at Old Trafford on Sunday. Stoke City's Marko Arnautovic scored in stoppage time to snatch a point at West Ham and Swansea equalled their highest ever points tally (47) in a Premier League season following their draw with Everton.