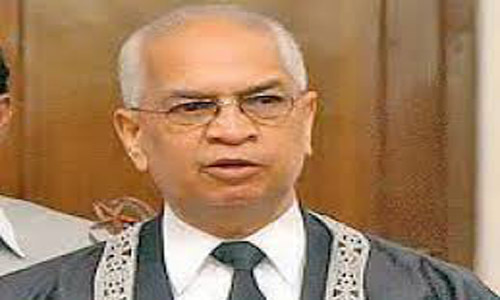 KARACHI (92 News) - Supreme Court former chief justice Rana Bhagwandas passed away in Karachi on Monday. He was under-treatment since he suffered a cardiac arrest a few days ago. Bhagwandas was born to a Hindu Rajput family in Naseerabad, Larkana on December 20, 1942. He studied law and received a Master’s degree in Islamic Studies. He started practice as lawyer in 1965. He was appointed a civil judge in Larkana in 1967. Later, he was made the Supreme Court judge in 1999. He was also appointed the acting chief justice when former president Pervez Musharraf sacked then Chief Justice Iftikhar Muhammad Chaudhry on March 9, 2007. He worked as the chief justice till July 2007. He was nominated as the chief election commissioner in 2014, but he refused to accept the slot. Bhagwandas also worked as the chairman of the Federal Public Service Commission (FPSC). He was cremated at Golimar Shamshan Ghat. In a condolence message, Prime Minister Nawaz Sharif said that Rana Bhagwandas played a vital role in the dispensation of justice. He said that Rana Bhagwandas was a man of principles and a democrat. Meanwhile, President Mamnoon Hussain, Pakistan Tehrik-e-Insaf chairman Imran Khan and Muttahida Qaumi Movement chief Altaf Hussain have also condoled his death in separate messages. On the other hand, a one-minute silence was observed during the Sindh Assembly session and Federal Cabinet meeting. All the judicial activities remained suspended in the Sindh High Court.