LAHORE (92 News) – Following the attack on the Punjab Institute of Cardiology (PIC), the Pakistan Rangers have been called to maintain the law and order of Lahore. According to the details garnered, due to the unfortunate incident that occurred today at PIC resulting in the loss of three lives, law and order situation of the city remains precarious as of now. However, the government decided to deploy Rangers at important locations of the provincial capital. It is pertinent to mention here that the fears exist of a possible civil disruption due to the loss of lives in today’s incident. The rangers have been called in to safeguard important government institutes and installations from a possible riot. The interior ministry said that 10 platoons and two companies of the paramilitary force have been deployed in Lahore. He said that It added that one platoon will be deployed at the Governor House while another will be stationed at the area surrounding Lahore GOR. The rest of the platoons, one each, will be deployed at the GPO Chowk Mall Road, Punjab Assembly, the Supreme Court Registry, Lahore High Court, Civil Secretariat, Aiwan-e-Adal, the IG office. One platoon will also be deployed at the PIC. 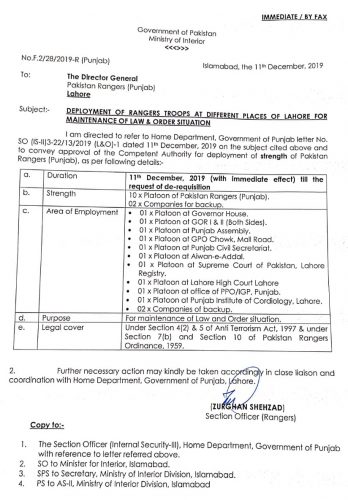 Two companies will be present in the city as a reserve force. Rangers have been deployed in the city as per the Anti-Terrorism Act 1997 4(XXII) and 5. The paramilitary force has been deployed under the Pakistan Rangers Ordinance 1959 provision seven and 10. Earlier today, at least three patients lost their life during the attack at PIC by lawyers stormed and ransacked PIC in protest against doctors. The administration hided to save their lives when the PIC was attacked by the rioters, however, the process of treatment for patients stopped for a while and three patients died during this horrible scene. When the enraged layers attacked at the PIC, the patients also harassed and the doctors ran from the scene left patients on mercy of God. They left the medical examination of patients as well as the patients and their relatives also compelled to flee for saving lives. One relative of patient said that the lawyer snatched oxygen bag and another old-aged woman narrated the story of hooliganism by the lawyers. Doctors were made hostage by lawyers for almost two hours. Doctors chanted slogans against Dr Yasmeen. The protesters forcibly entered PIC where a heavy contingent of the police was already present. They also beat up the media persons and stopped from covering the event. They also entered the ICU.