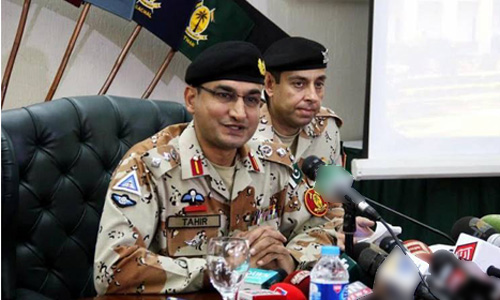 KARACHI (92 News) – Col Tahir, a spokesman for the Sindh Rangers, has confirmed the arrest of 20 people, including target-killers and culprits, from Nine Zero. Giving a briefing on Wednesday, Col Tahir said that the operation was launched after confirming presence of criminals in Nine Zero. He claimed that a huge quantity of foreign weapons and arms stolen from the NATO container. The spokesman said that Amir Khan had been arrested for interrogation. He said that Khurshid Begum Memorial Hall had been sealed and handed over to the police. He said that they will investigate the presence of a huge quantity of weapons and culprits involved in heinous crimes in Nine Zero. “Legal action will be taken against responsible people.” The spokesman asked traders and transport owners to continue their business. He said that stern action will be taken against saboteurs. He said that they will not tolerate barriers in any area, including Nine Zero.