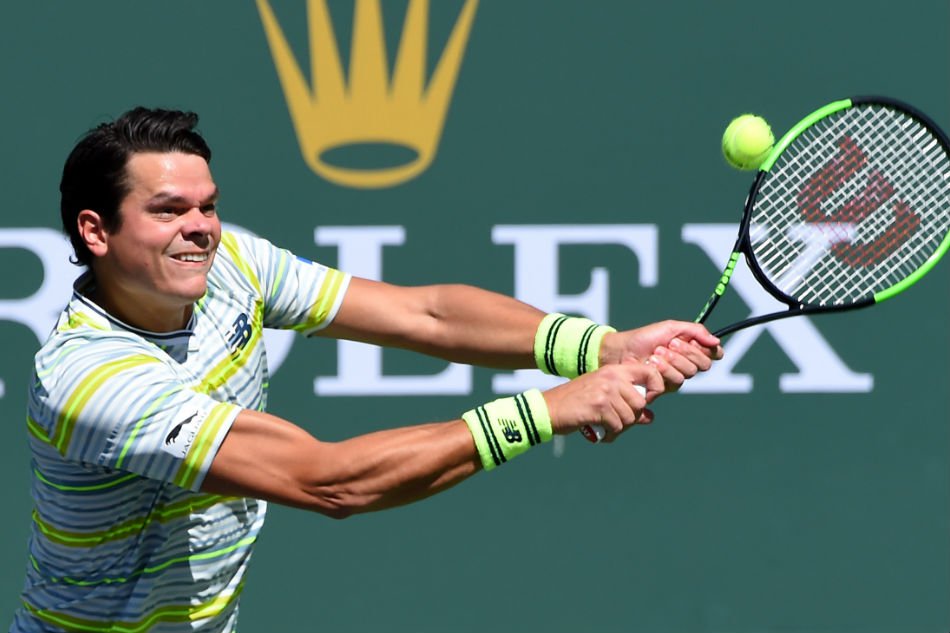 CALIFORNIA (Reuters) - Milos Raonic overcame his frustrations to outlast Sam Querrey and advance to the BNP Paribas Open semi-finals with a 7-5 2-6 6-3 victory on Friday while Juan Martin del Potro found his form late to down Philipp Kohlschreiber 3-6 6-3 6-4.

Clearly unhappy at times with his play, the Canadian Raonic won the final three games of the third set to return to the Indian Wells semis for the third time in four years.

Raonic, 2016 Wimbledon runner-up, broke American Querrey for a 5-3 advantage, then salvaged a tense final game in which Querrey had three break points.

The Canadian’s win sets up a semi-final clash with Del Potro on Saturday that will pit power against power.

World number one Roger Federer will meet Borna Coric in the other semi-final on Saturday.

After a slow start to his season following a calf injury last year, Raonic prevailed by serve-volleying and attacking the net against Querrey, who was playing in his first Masters 1000 quarter-final.

The Canadian won 17 of the first set’s final 21 points, including two breaks of serve, to take the set after Querrey had led 5-4.

The American broke twice in the second set before Raonic came through in the third.

“Sometimes they (his emotions) have taken me for a ride, they have cost me matches, but I have also been cost matches by holding it in,” Raonic said in a courtside interview.

“So sometimes it is good to get them out and try to express energy in the right way.”

Although he fired 17 aces and won 74 percent of his first-service points, the Canadian said he needed to improve.

After a sluggish start, Del Potro rediscovered his punishing forehand in the final two sets of his match against Kohlschreiber and let out a loud roar when the German sent the Argentine’s serve out on match point.

Both players served well, each putting more than two-thirds of their first serves into play, but Del Potro won 75 percent of his first service points compared to just 65 percent for Kohlschreiber.

“He is a very smart guy, his game is so good and he made me run a lot so my legs are completely tired,” the 29-year-old Del Potro said in a courtside interview.

“I got lucky in the end of the match, I played well in the important moments and I’m so glad to be back in the semi-finals.”

Del Potro will battle Raonic in the semi-final on Saturday, with the player best able to handle their opponent’s booming serve the most likely to prevail.

Raonic has won two of their three head-to-head meetings including a straight sets win in the Delray Beach Open semi-finals last year.