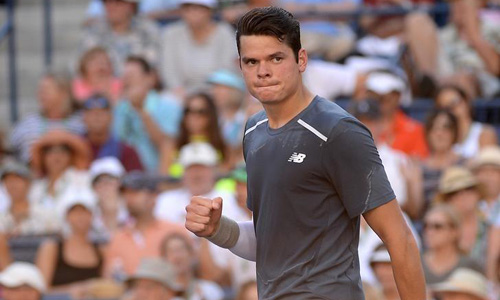 CALIFORNIA  - Big-serving Milos Raonic fought back from a set down and saved three match points to upset Rafa Nadal 4-6 7-6(10) 7-5 in a pulsating quarter-final at the BNP Paribas Open on Friday. The 24-year-old Canadian's first win over Nadal in six meetings earned him a place in Saturday's semi-finals where he will face Roger Federer, who cruised through the last eight with a ruthless 6-4 6-0 demolition of Czech Tomas Berdych. World number one Novak Djokovic will face fourth-seeded Scot Andy Murray in Saturday's other semi in a re-match of this year's Australian Open final, won by the Serb in four sets. "I feel obviously all sorts of good," said sixth seed Raonic, who blasted 19 aces past Nadal before sealing victory in just under three hours. "There was a lot of up and down through that match, and all I could ask of myself was just keep competing and hope to find a way. I got fortunate a few times and it worked out." Nadal, a three-times champion at Indian Wells, broke Raonic once to clinch the opening set in 37 minutes and had further break point opportunities in the first, fifth and ninth games of the second -- all five of them saved by the Canadian. The set went to a nerve-jangling tiebreak where Nadal squandered three match points before Raonic, playing more aggressively, finally squared the match at his third attempt when the Spaniard netted a forehand. Both players saved further break points in the third set before Raonic broke Nadal in the 11th game when the Spaniard hit a backhand long and the Canadian advanced into the last four by comfortably holding in the 12th. "I had more opportunities than him in the first (set), in the second and in the third too," said Nadal, who had won all eight of his previous quarter-final matches at Indian Wells. "I had a lot of chances to win. "But today I lost against a great opponent who was fighting for every ball with very positive attitude." SEEKING FIFTH TITLE Federer, bidding for a record fifth title at the ATP Masters 1000 event, broke Berdych once in the first set and three times in the second to advance after just 68 minutes on court at a sun-bathed Indian Wells Tennis Garden. "I was really able to put the pressure on Tomas from the baseline," the Swiss world number two said after hitting 21 winners while improving his career record against the Czech to 13-6. "I felt like I was hitting the ball well but also playing the right way. I had the upper hand and he didn't have his best serving day ... I was able to control the match." Ninth-seeded Berdych, whose best run at Indian Wells came in 2013 when he lost to Nadal in the semi-finals, served five double faults and never earned a single break point against the Swiss. Federer broke Berdych in the seventh game of the match, when the Czech netted a backhand, before taking the opening set in 40 minutes. The Swiss master dominated the second set with superb all-round tennis against an increasingly error-prone Berdych, who lost serve in the first and third games to go 0-3 down. Federer again broke the Czech in the fifth, celebrating with a fist pump after crunching a forehand winner down the line, before serving out to book his place in the last four. - REUTERS