Rare 'supermoon' eclipse to unfold in Pakistan on Monday 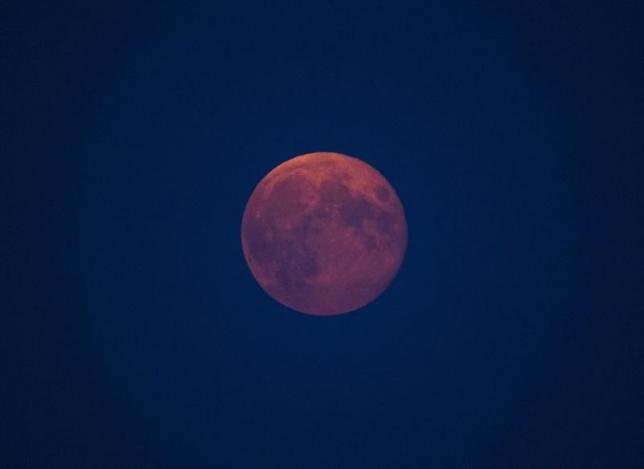 Rare 'supermoon' eclipse to unfold in Pakistan on Monday

CAPE CANAVERAL, Florida – Sky-watchers around the world are in for a treat Sunday night and Monday when the shadow of Earth casts a reddish glow on the moon, the result of rare combination of an eclipse with the closest full moon of the year. In Pakistan, the eclipse will be from 5:11pm to 10:22pm on Monday. The total "supermoon" lunar eclipse, also known as a "blood moon" is one that appears bigger and brighter than usual as it reaches the point in its orbit that is closest to Earth. "There’s no physical difference in the moon. It just appears slightly bigger in the sky," planetary geologist Noah Petro, with NASA’s Goddard Space Flight Center in Greenbelt, Maryland, said. If skies are clear, the phenomenon will be visible from North and South America, Europe, Africa and parts of West Asia and the eastern Pacific. In the United States, the eclipse begins at 8:11 p.m. EDT. The total eclipse starts two hours later and lasts for one hour and 12 minutes. It has been more than 30 years since a supermoon combined with a lunar eclipse, said NASA. The next total lunar eclipse will not be until 2018. The next supermoon-lunar eclipse combination will not happen until 2033. For more than an hour Sunday night, Earth’s shadow will blanket the full moon as the planet passes between the sun and the moon. The brilliant white glow of the moon will slowly transform into a dim red. The coloring is caused by Earth’s atmosphere scattering sunlight into the shadow. Because the moon is not perfectly round, its distance from Earth varies by about 31,000 miles (49,900 km) as it circles around the planet every 27 days. At its closest point, known as perigee, the moon comes as close as 225,622 miles (363,104 km) from Earth. At apogee, the most distant point, the moon is 252,088 miles (406,696 km) away. –Reuters