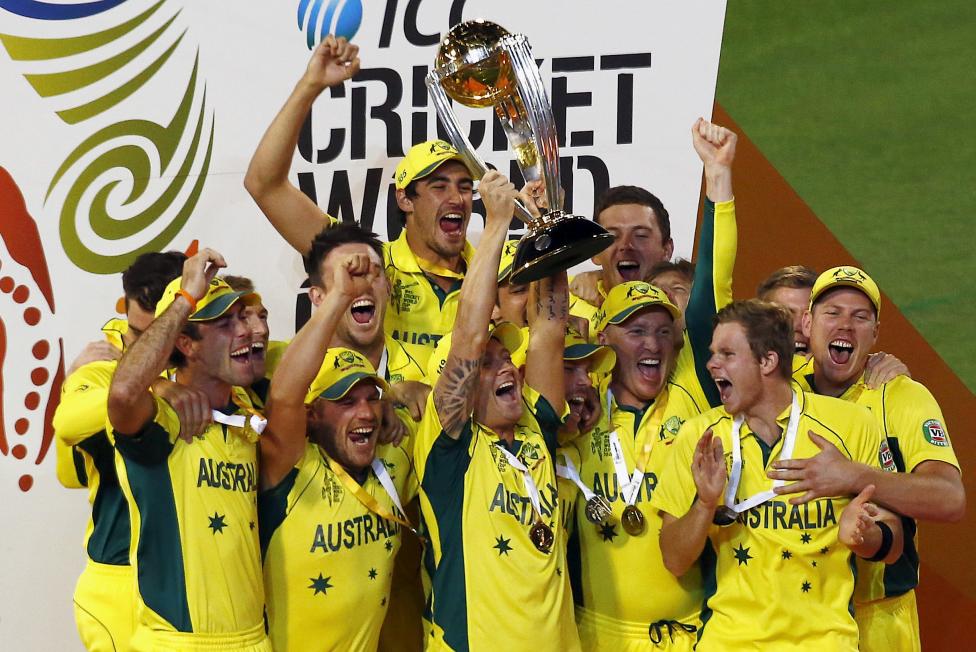 MELBOURNE - Following are reactions to Australia's fifth World Cup triumph after they beat New Zealand in Sunday's final at the Melbourne Cricket Ground. Australia captain Michael Clarke: "I think obviously there's no such thing as fairy-tales in sport, but that's probably as close as it gets for me. Not only to win a World Cup but to win in front of your home fans, and there was a lot of expectation... I think the boys soaked that up from day one and loved every minute of it." New Zealand captain Brendon McCullum: "It's been one hell of a ride and something that we'll remember for the rest of our lives. It would have been great to have got the silverware but it wasn't meant to be, but I think what we were able to achieve in this tournament will last for a long time." Tony Abbott, Prime Minister of Australia on Twitter: "Watching @stevesmith49 hit #CWC15 winning runs! Congrats @MClarke23 on brilliant ODI career & NZ on great tournament." John Key, Prime Minister of New Zealand, on Twitter: "Unfortunately not the result the country was hoping for, but the @BLACKCAPS have still made us all incredibly proud over the past six weeks." Actor Hugh Jackman on Twitter: "Congratulations @cricketworldcup Farewell Clarkey. What a way to go out!" Australian bowler and player of tournament Mitchell Starc: "It's nice to see bat dominate ball every now and again. There's been some big scores, but the whole tournament has been fantastic. We've worked really hard at our bowling. The whole bowling unit was awesome." Australia all-rounder and man of the match James Faulkner: "I thought Ross Taylor and Grant Elliot had an exceptional partnership considering what happened at the start, to pull things back for them, but at the end of the day, to bowl them out for 183 was fantastic." West Indies batting great Brian Lara on Twitter: "Well played Australia you were the best team by far and your wins from the quarterfinals onwards were clinical and showed your superiority!" Former Australia spinner Shane Warne on Twitter: "Congrats to my great mate @MClarke23 & the entire Australian team, just an outstanding result To all the Nz team, you won our hearts ! " Former Australia stumper Adam Gilchrist on Twitter: "Australia, you #*+#*#+ beauty!!!" Former Australia bowler Glenn McGrath on Twitter: "Congratulations to @mstarc56 on winning the player of the tournament for @cricketworldcup Sensational bowling mate very well deserved #CWC15" West Indies batsman Chris Gayle on Twitter: "Congrats @MClarke23 & team Australia on winning the #WorldCup2015 #FullJoy #CWC15 #63NotOut #Champions-well done NZ! Great finish pups" Former England captain Michael Vaughan on Twitter: "Very fitting that Australia are crowned World Champions .... #63NotOut #riphughsey" Former India player Sanjay Manjrekar on Twitter: "4 title wins in last 5 world cups is a testimony to the Australian cricket culture. Well done Australia!#ICCCricketWorldCup" Former South Africa all-rounder Jacques Kallis on Twitter: "Congrats to Australia. Well deserved Champions. NZ can be proud their campaign too. End of a fabulous WC that has enhanced ODIs reputation" Pakistan all-rounder Shahid Afridi on Twitter: "Congrats to the @CricketAus on an outstanding trnmnt.Terrific cricketers, worthy & brilliant co-hosts as @BLACKCAPS surely u were brilliant." India all-rounder Yuvraj Singh on Twitter: "Bad luck @BLACKCAPS but u guys had an outstanding tournament Congratulations to Aus for showing yet again how good is your infrastructure" England all-rounder Stuart Broad on Twitter: "Australia coped with the pressure very impressively. Deserved to win in front of their own record crowd, congrats!" - Reuters