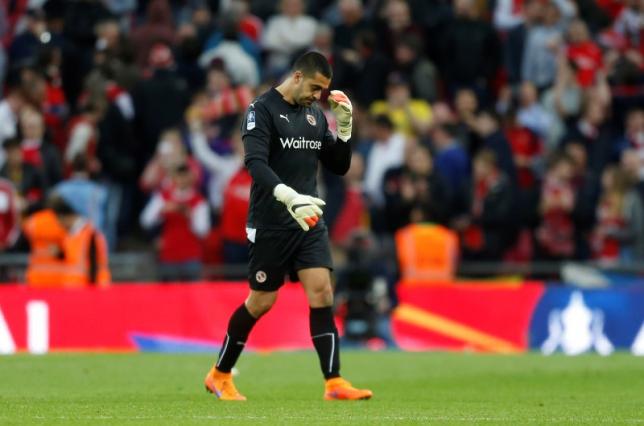 LONDON - FA Cup holders Arsenal were taken to extra time before a horrendous error by Reading goalkeeper Adam Federici brought the Championship side's dream to an end in a 2-1 semi-final defeat on Saturday. Arsenal's Alexis Sanchez snatched his second goal at the end of the first extra period to subdue the plucky second-tier strugglers, but his tame goalbound shot barely trickled over the line after being spilled by the devastated Federici. It was an unfortunate way to decide a pulsating cup tie in which Reading's spirit and sheer will to win allowed Garath McCleary to equalise for Steve Clarke's side early in the second half after Sanchez had given Arsenal a 39th-minute lead. Arsenal, who were playing in their record 28th FA Cup semi-final, will now face either Liverpool or Aston Villa, who play their last-four clash on Sunday, in the final on May 30. If it was supposed to be a one-sided stroll in the park at Wembley for Arsene Wenger's side, Reading had other ideas. While Arsenal had the best of the early chances, with defender Per Mertesacker's header drawing an excellent low save from Federici and Mesut Ozil bending a free kick a fraction off target, it all looked laboured. They did, however, open the scoring when Ozil adjusted his sights to pick out Sanchez with a pinpoint lofted ball into the box and the Chilean twisted, paused and turned before sliding his finish beneath Federici. The advantage lasted nine minutes into the second half as Reading came out snarling with intent and purpose. GOAL-LINE TECHNOLOGY Striker Pavel Pogrebnyak bulldozed his way to the byline and his far post cross picked out McCleary, whose shot had Wojciech Szczesny scrambling in vain to keep it out, with referee Martin Atkinson awarding the goal with the help of technology. That seemed to fill Reading with belief they could pull off an almighty upset and they were unlucky to have a penalty appeal turned down when Hal Robson-Kanu's cross was blocked by Mathieu Debuchy's outstretched arm. Arsenal ended the game on top and would have won in normal time if last season's cup final hero Aaron Ramsey had not hit the post with Federici beaten and the goal gaping with minutes remaining. Extra time seemed a bridge too far for Reading, who were already on the back foot before Sanchez cut inside the box, shifted the ball on to his right boot and fired in a low effort that squirmed beneath Federici who scrambled helplessly to prevent it crossing the line. The keeper was in tears at the final whistle as the Arsenal players celebrated on the pitch. - Reuters