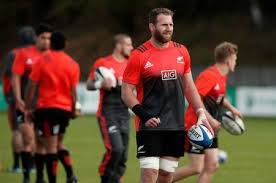 WELLINGTON (Reuters) - Kieran Read’s return to his rampaging best could not have come at a better time for his Canterbury Crusaders team ahead of the Super Rugby final against the Lions as well as for All Blacks coach Steve Hansen as they prepare for the Rugby Championship.
Read missed virtually all of Super Rugby as he recovered from back surgery late last year but was an unofficial member of the All Blacks squad for their series against France in June. Hansen described his captain as making himself ‘a pain in the butt’ during the training sessions, where his role was to replicate the tactics of the French and he returned for the Crusaders after the international break. Read’s minutes were carefully managed as he built back into the competition and he has been increasingly more stinging on defence in each of his four games since his return. He is also starting to get back to his best running with the ball, if his top-end pace is not quite back to what it was, which Hansen was hoping to see by the time the All Blacks open their Rugby Championship defence against Australia on Aug. 18. “When he does that it looks like he will be right back to his very, very best so we know that’s a pretty good level of a rugby player,” Hansen told reporters this week. “So we’re looking forward to getting him back.” Injuries notwithstanding, Read is almost certain to lead the All Blacks at next year’s Rugby World Cup in Japan. With that longer-term view in mind, he had said previously that he was not going to rush his return to the field, but had been itching to get back as he watched his team mates take control of the Super Rugby competition. “One of those driving forces was that I knew if I could get back, I could have a big impact at us having a crack at this championship,” Read said. “It really pushed me.” While the Crusaders have dominated the competition since its inception in 1996 and will be attempting to win their ninth title on Saturday, the clash against the Lions will be their first final at home since 2008. Read is the only player to have appeared in that match, as a raw-boned youngster on the verge of making his All Blacks debut and playing at home for the title was something he was excited about. “I think when I played that final as a 22-year-old, you just turn up as a young fellow, play the game and celebrate and move on,” Read said. “It didn’t really sink in too much. You thought ‘oh this will come around again’ but it is a tough competition. “To be here again is exciting.”