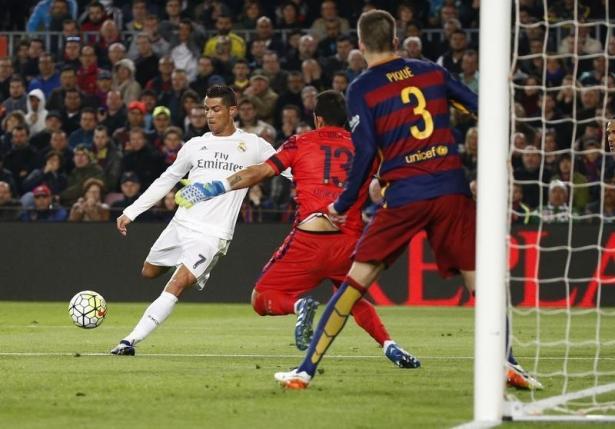 LONDON - Real Madrid ended La Liga leaders Barcelona's long unbeaten run with a 2-1 win in the Clasico, while Leicester City's fourth straight 1-0 win put them further atop the Premier League. Juventus moved six points clear in Serie A, while Bayern Munich won to keep up their advantage in the Bundesliga and Ajax Amsterdam held on to top spot in the Dutch championship. SPAIN Real Madrid's Cristiano Ronaldo struck late for a 2-1 win in the 'Clasico' at the Nou Camp that ended Barcelona's 39-match unbeaten run amid some debatable refereeing decisions. Gerard Pique headed in a corner to give La Liga leaders Barca a deserved lead after 56 minutes but Karim Benzema levelled with an acrobatic volley. Real captain Sergio Ramos was sent off in the 83rd minute before Ronaldo chested down a high cross from Gareth Bale and fired the ball in at the near post two minutes later. Barca have 76 points with seven matches left, seven ahead of third-placed Real. Atletico Madrid are six points off the pace after Antoine Griezmann's double in a 5-1 rout of Real Betis. ENGLAND Leicester City took another step towards their first top-flight title when they beat Southampton 1-0 to open a seven-point gap over Tottenham Hotspur, who drew 1-1 at Liverpool. Leicester beat Southampton with a first half header from captain Wes Morgan to secure their fourth successive 1-0 victory and moved on to 69 points from 32 matches. Striker Harry Kane earned a creditable draw for second-placed Spurs at Anfield after Philippe Coutinho had opened the scoring for Liverpool, who remain ninth. Arsenal in third closed the gap on Tottenham to four points with a 4-0 home win over Watford. GERMANY Bayern Munich stayed five points clear of Borussia Dortmund at the top of the Bundesliga after both teams won. Franck Ribery's first-half goal gave title holders Bayern a 1-0 win over Eintracht Frankfurt, while Dortmund hit back from 2-1 down to beat Werder Bremen 3-2 with an 82nd minute winner from Adrian Ramos. ITALY Leaders Juventus went six points clear with seven games to play after beating visiting Empoli 1-0 with a Mario Mandzukic header. Second-placed Napoli lost ground when they went down 3-1 at Udinese. Bruno Fernandes scored twice for Udinese while Gonzalo Higuain struck his 30th league goal of the season for Napoli but was later sent off. FRANCE Paris St Germain geared up for their Champions League quarter-final clash at home to Manchester City with a 4-1 win over visiting Nice. Zlatan Ibrahimovic bagged a hat-trick and David Luiz added another goal as PSG, who have already wrapped up the title and now have 80 points with six games left, cruised towards a convincing victory. Monaco, who lost 2-1 at home to Girondins de Bordeaux, are second on 55 points, three points ahead of Olympique Lyonnais after late goals by Rachid Ghezzal and Alexandre Lacazette gave them a 3-1 victory at Lorient. NETHERLANDS Ajax Amsterdam held on to top spot in the Dutch league after a comfortable 3-0 home victory over PEC Zwolle, the first match they had played since the death of club hero Johan Cruyff. The victory moved Ajax to 71 points from 29 matches, two ahead of second-placed PSV Eindhoven, who beat AZ Alkmaar 4-2, with five rounds of matches still to play. There were emotional scenes at the Amsterdam Arena before the game as Cruyff, who died aged 68 on March 24 after a battle with lung cancer, was remembered with giant replicas of his Ajax, Barcelona and Netherlands shirts laid out on the pitch.