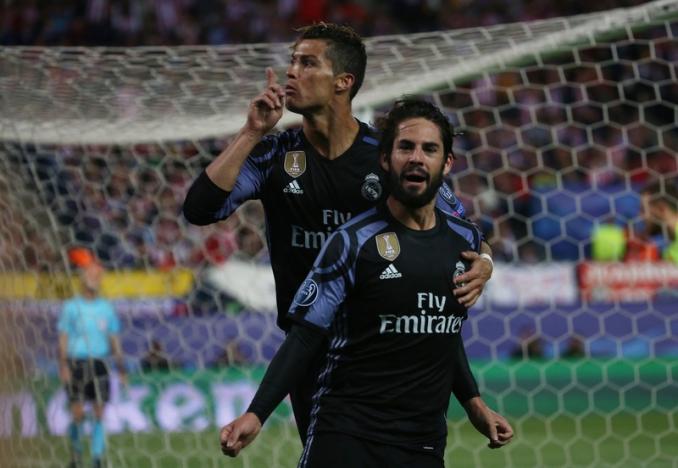 MADRID - Real Madrid survived an early Atletico Madrid onslaught to reach the Champions League final 4-2 on aggregate on Wednesday and set up a mouth-watering clash against Juventus.

Atletico roared into a two-goal lead in the semi-final second leg with a Saul Niguez header and Antoine Griezmann’s penalty, but Isco notched in the 42nd minute for Real who saw out the game calmly to lose 2-1 on the night and ease into the final.

Real, who won the first leg at home 3-0, have now eliminated Atletico from the competition in four consecutive seasons, including the 2014 and 2016 finals.

Zinedine Zidane’s side can become the first team to retain the Champions League title when they face his former club Juventus in the final in Cardiff on June 3.

“It’s special, for sure, (Juventus) gave me everything,” Zidane told reporters. “But I’m with Real Madrid, another club of my life. It will be a beautiful final.”

Atletico's final European game at the Vicente Calderon before they move stadiums will be remembered for the fantastic atmosphere the supporters created as they tried to help their team overcome their arch-rivals.

But Simeone’s men could not break their European curse against Real.

“The first 20 minutes of this magic night at the Calderon will be remembered forever,” the Atletico coach said. "We have to be proud of the players. They kept hope, showing we weren’t talking for the sake of talking but because we believed.”

Driven on by the deafening Calderon, Atletico started well, creating more danger in the opening minutes than they managed in the entire first leg before Saul nodded home Koke’s corner in the 12th minute.

But Real, who last failed to score 61 games ago, were not to be denied. Karim Benzema’s sensational solo dribble on the left byline took out three Atletico defenders and he cut the ball back for Toni Kroos to drive a shot at goal.

Jan Oblak made an excellent save to keep the German at bay but Isco was on hand to poke home from close range and give Real a precious away goal.

Atletico continued to press but Navas pulled off a fine double save to deny Yannick Carrasco and Kevin Gameiro.

Cristiano Ronaldo thought he had added a second for Real but it was harshly ruled out for offside and the visitors calmly kept possession in the closing minutes to stay on course for a 12th European Cup. -Reuters