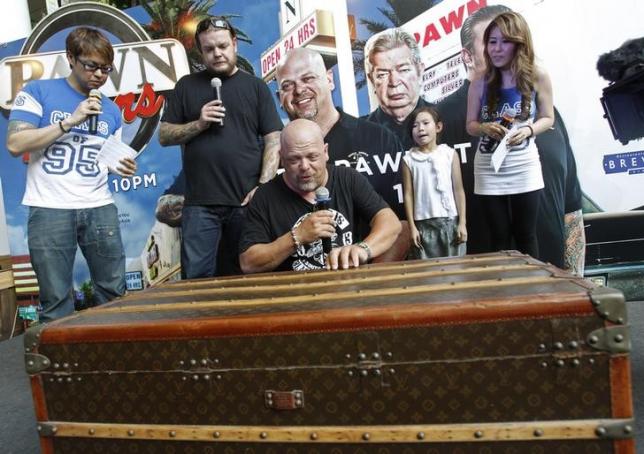 AUSTIN, TEXAS - After centuries on the fringe of consumer finance, the neighborhood pawn shop is pushing its way toward the mainstream, thanks to the power of reality television and the long arm of government regulation. The History Channel's hit show "Pawn Stars," featuring a Las Vegas shop run by three generations of the quirky but endearing Harrison family, has helped transform the image of the pawn shop, portraying it as a fun place to do business and discover one-of-a-kind buys. At the same time, more consumers, even those with other loan options, are finding that the simplicity of the pawn shop has its appeal. "I have been coming to pawn shops for years but I guess the TV shows makes it easier, you know, more acceptable," said Eddie, an unemployed Texan who asked to be called by his first name, after he pawned a diamond ring for $250 at EZ Pawn in Austin. "The big change in the industry has been the mainstreaming of the image," said Emmett Murphy, spokesman for the National Pawnbrokers Association. "It opened the doors for America to come into their pawn shops to see what it is about." The makeover, combined with a pending government crackdown on exorbitant payday loans that are geared to people on the low end of the income spectrum, have made these heady days for one of the world's oldest forms of consumer finance. Pawn shops, with their three golden balls symbol, much like barbershop poles, have been readily identifiable in the United States since the 17th century. They extend loans on an item of value, say, a ring or a guitar, brought in as collateral. If the loan and interest are paid off on time, the item is returned to the borrower. If not, the pawnshop can sell the item and pocket the proceeds. "Customers tend to use us when they need us, redeem their merchandise and we won't see them for a number of months ... and then we see them again," said Larry Nuckols, 60, chairman and co-owner of Money Mart Pawn & Jewelry, with 26 stores in Texas and four more in two other states. Pawnbrokers expect an increase in loans this year, according to a National Pawnbrokers Association industry survey, although most are doubtful of seeing much growth on the retail side of the business, where unclaimed goods are sold. Descriptions and serial numbers of items taken in are typically sent to police along with information on who pawned them. Taking in stolen items usually means a loss of the loan money for the store, an incentive to guard against accepting suspect goods. There are about 10,000 pawn shops in the United States, nearly 90 percent of them independently owned. Rick Harrison's World Famous Gold & Silver Pawn Shop in Las Vegas remains open around the clock to cater to patrons of the desert city's casinos. The average amount of a pawn loan is about $150 with 85 percent of all loans being repaid, according to the industry association. While most customers reclaim their goods, borrowers know their credit rating won't suffer if they default. "It is a non-judgmental loan and a non-recourse loan, meaning the customer is under no obligation to repay," Nuckols said. The four main publicly traded companies that operate national pawn chains have a combined market capitalization of about $4 billion and represent about 11 percent of the overall industry. Over the last 10 years, shares in the biggest companies that operate pawn shops have outperformed the S&P Industrials Composite Index. Meanwhile, the pawn shop's main competitor is headed for closer scrutiny. A US consumer financial watchdog last week outlined plans to crack down on payday lending practices that leave borrowers with debt they cannot repay. Payday loans - small sums borrowers agree to repay in a short time, typically with their next paycheck - are attractive partly because of convenience. But consumer advocates say payday loans, which can carry annualized interest rates of more than 500 percent, can trap low-income borrowers in a cycle of mounting debt. Online lenders, which sometimes skirt state laws, are a particular concern, they say. By comparison, the interest on pawn loans can vary from 2 percent a month in states such as Missouri and North Carolina to 25 percent a month in Alabama, Mississippi and Montana, according to a Vanderbilt University Law School research paper. Pawn credit is regulated at the state and local level and has avoided national control, in part because it has no impact on a borrower’s future access to credit, says the paper "The Pawn Industry and Its Customers." "Pawnbroking is not in the conversation at all when we think about regulating financial services," said economist Paige Marta Skiba, a professor of law at Vanderbilt and one of the paper's authors. - Reuters