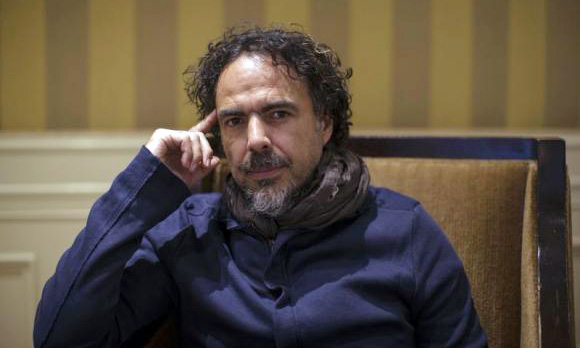 MEXICO CITY (Reuters) - A new wave of Mexican filmmakers is following in the wake of the success of Alejandro G. Inarritu, bent on breaking Hollywood convention and making daring movies with high-profile actors. Inarritu's "Birdman" garnered nine Academy Awards nominations including best picture, best director and best actor, and follows fellow Mexican Alfonso Cuaron's best director win last year with space thriller "Gravity," a first for a Latin American filmmaker. Inarritu, Cuaron and fellow "Three Amigos" director Guillermo del Toro began their careers in the 1990s when the domestic film industry was practically dead and they left Mexico to make the climb to global fame. "We were very lucky to have the possibility to be fed by European filmmakers, by some American filmmakers ... cinema of the world," Inarritu said. "Mexico is still an incredible fountain of culture, but cinematically speaking ... 20 years ago, it was horrible." The trio managed to maintain control over their iconoclastic film projects within the Hollywood system, raising Mexico's profile as they made both big blockbusters such as Cuaron's "Gravity" or del Toro's "Pacific Rim," and more personal, lower-budget projects such as Inarritu's "Birdman." Mexican film production has surged from 28 films in 2000 to 130 last year, according to industry group Canacine. But top new talents are not looking to make it in Hollywood. This year will see new films from Gerardo Naranjo and Michel Franco, two of the most notable rebels among Mexico's growing ranks of directors who have cast aside studio formulas. This new generation grew up in a rapidly globalising Mexico following the opening of the country's closed economy in the 1990s and the end of authoritarian one-party rule in 2000. Naranjo's early films, "Miss Bala", about a beauty queen sucked into the violent world of drug traffickers, and "I'm Gonna Explode", a tale of teen love and rebellion, nabbed the attention of 20th Century Fox. He spent almost four years working on developing two major Fox films, including a remake of "Death Wish" with Bruce Willis, but quit in frustration with the studio system. "It is important to recognise the mastery of the older generation," Naranjo said. "Cuaron, Inarritu, they found a way to protect their projects and that is the hardest thing to do in the United States. The industry finds ways to limit creativity over and over."   HOLLYWOOD BLUES   But Naranjo's defiant exit from Hollywood grabbed attention and he drew in a group of young actors led by Dakota Fanning to star in his new independent film "Viena and Fantomes." After struggling for years in the studio system with little to show, he wrote, directed and shot the film himself in a matter of months, and is now editing. "I feel I had something to offer that was lacking in the industry," he said. "I am giving American actors the chance to do what they should be doing but don't get the chance to do." "Viena" stars Fanning as a young groupie in the thrall of a punk band. "It is her trip to understand that celebrity does not come out of talent in America," Naranjo said. Mexico's directors have developed sophisticated styles of filmmaking that have pushed the traditional boundaries of fiction and documentaries, winning the top honours at the world's biggest festivals. They are limited by ultra-low budgets, around $2 million, but by holding to their personal visions, Mexican filmmakers are attracting big Hollywood actors starved for meatier roles. Michel Franco, whose bullying-themed "After Lucia" won a top prize at Cannes in 2012, is now editing his first English-language film, "Chronic", starring Tim Roth. Roth, who sat on the jury that feted Franco in Cannes, was excited to work with the young director and convinced him to re-write a script that Franco was working on with a male lead. "Chronic" was inspired by the woman who cared for Franco's dying grandmother, now Roth who plays a nurse attending terminally ill patients as he struggles to reconnect with the family he abandoned. "My films are not trying to be easy on the public, but rather are developing a story that is not very common and does not fit into a genre," he said. Roth is also in one of the lead roles in "600 miles" the debut film from Gabriel Ripstein, who also co-produced "Chronic" with Franco. "600 Miles" won the coveted best first feature award at Berlin in February for Ripstein, the son of Mexican film auteur Arturo Ripstein, who worked as an executive for Hollywood studios for a decade. "It is a question of finding actors who want to work with interesting filmmakers," Ripstein said. "But we are keeping control over the projects and don't have to make concessions." Loosely inspired by the botched Fast and Furious programme where U.S. agents lost thousands of high-powered guns in Mexico, "600 Miles" tracks a young Mexican on his first run as a gun smuggler and stars Roth as a U.S. agent hunting him. With Hollywood balance sheets dependent on blockbuster franchises, directors are confident they will be able to keep attracting disaffected talent to their independent projects. "Its not the same Hollywood that Inarritu and Cuaron went to," said Gaz Alazraki, who is directing Netflix's first Spanish-language series "Club de Cuervos." "But there are a whole lot of great actors who want to make personal films, so if you can team up with them, it's great."