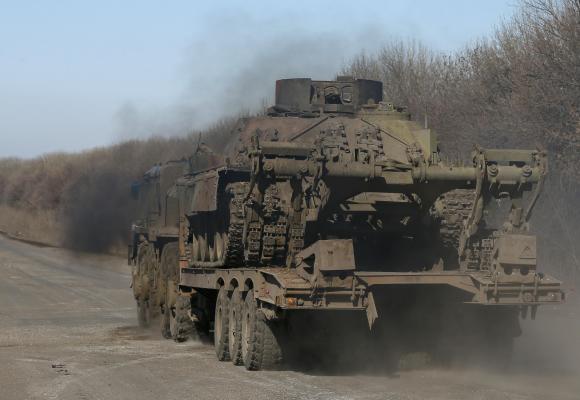 DONETSK, UKRAINE (Reuters) - Pro-Russia separatists said on Tuesday they began withdrawing heavy weapons from the frontline in east Ukraine under a ceasefire deal, but the Ukrainian military, which says it won't pull back until fighting stops, reported further shelling. Fighting has eased in eastern Ukraine in recent days after the rebels initially ignored a ceasefire that was due to start on Feb. 15 and stormed a government-held town. After taking the town, the Moscow-backed rebels have consistently indicated they want the truce to take effect. Kiev says the rebels are still shooting, which the rebels deny. Western countries have not given up on the ceasefire deal to end fighting that has killed more than 5,600 people, but have warned of new economic sanctions against Moscow if the rebels advance deeper into territory the Kremlin calls "New Russia". "Today at 9 in the morning (0600 GMT) the planned withdrawal of heavy equipment started," rebel commander Eduard Basurin told Reuters. "We're pulling it back 50 km from the boundary line ... Of course we won't say exactly where we're pulling it back to." Basurin denied Ukrainian military reports of fighting in southeast Ukraine, saying there had been "provocations" from the government side but no serious clashes. Kiev says the rebels have launched attacks on villages near Mariupol, a port of 500,000 people, which Ukraine fears could be the next separatist target. "There's been quite intense shelling since the morning. The situation is tense but under control," Dmytro Chaly, spokesman for the Ukrainian military in Mariupol, said on television channel 112. Among the areas Kiev said had been shelled were the village of Shyrokyne near Mariupol, and the area near Debaltseve, the town the rebels captured last week. Separatist press service DAN reported ten incidents of government shelling near the rebel-held stronghold of Donetsk. In a first step towards implementing the truce, the sides exchanged prisoners late on Saturday. On Sunday they said they had agreed to start the withdrawal of heavy weapons. But on Monday Kiev said it would not pull back until shooting stopped.