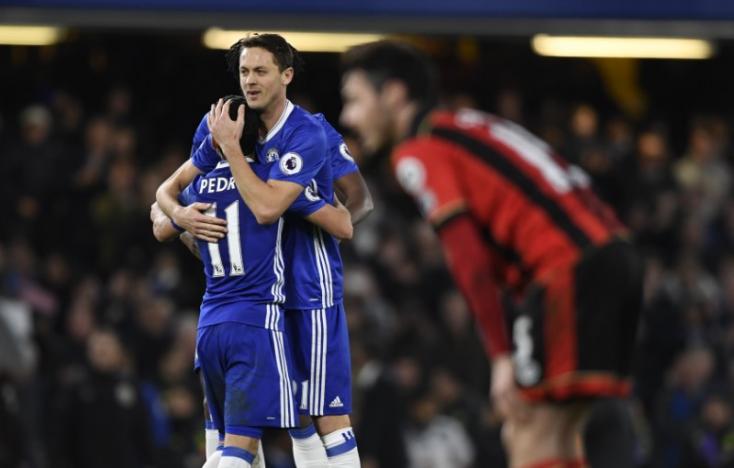 LONDON - Spaniard Pedro scored twice as Chelsea tightened their grip on top spot by sweeping past Bournemouth 3-0, a club record 12th successive Premier League win taking them seven points clear. Approaching the halfway point of the season, Chelsea have 46 points to the 39 of Manchester City who won 3-0 at Hull City. Liverpool, who host Stoke City on Tuesday, and Arsenal, who needed a late Olivier Giroud goal to sink West Bromwich Albion 1-0, both have 37 points. With Diego Costa suspended, Chelsea manager Antonio Conte opted to play without a recognised striker and he was rewarded with inventive attacking displays from Pedro, Belgian Eden Hazard and Brazilian Willian. Pedro's sumptuous chip put the home team ahead after 24 minutes before Hazard made it 2-0 with a penalty at the start of the second half. Bournemouth, who won this fixture last season when Jose Mourinho was in charge at Stamford Bridge, conceded a third goal when Pedro's deflected shot went in during stoppage time. The victory took Chelsea past their 11-game winning run from 2009, leaving them within two of the top-flight record set by Arsenal in 2002. "To win 12 in a row is not easy in this league. It's a fantastic run but it's important to continue that now," Conte told reporters. "We have another tough game (at home to Stoke on Saturday) and we have to prepare very well because, now, every team wants to beat you." Bournemouth manager Eddie Howe said: "They are an outstanding team. They have individuals of such quality that we couldn't keep them quiet the whole game." DEFENSIVE DISPLAY It was a similar story for bottom club Hull who contained Pep Guardiola's Manchester City for 72 minutes before Andy Robertson's rash tackle on Raheem Sterling gave the visitors a penalty that Yaya Toure tucked away with ease. Substitute Kelechi Iheanacho made it 2-0 before Sterling's cross was turned into his own net by Curtis Davies in stoppage time to seal a third consecutive win. "In the first half we forgot where the goal was, in the second half our strikers saw the goal a bit more and after the first goal it was easy," Guardiola said. Arsenal seemed set to drop points again, having lost their two previous games, as Tony Pulis' West Bromwich Albion frustrated them for 86 minutes at the Emirates. Then Giroud, given a rare league start by manager Arsene Wenger, powered a header past West Brom's impressive keeper Ben Foster from Mesut Ozil's cross. "We have an honest relationship," Wenger said of his French striker. "I have big respect for him and he knows that. He was not always playing and despite that he kept a strong motivation level." Sixth-placed Manchester United kept in touch thanks to a 3-1 defeat of Sunderland as former boss David Moyes had another disappointing day at Old Trafford. Daley Blind fired the opener in the 39th minute but inspired goalkeeping by Jordan Pickford prevented further damage until Zlatan Ibrahimovic slotted the second with eight minutes to go. Henrikh Mkhitaryan sealed United's fifth straight win when he cleverly flicked in the third before Fabio Borini grabbed a last-minute consolation for Sunderland. Leicester City's struggles continued when they lost 2-0 at home to Everton and the champions are now two places and three points above the relegation zone. "What a year. Everything was right for the first six months and now everything is wrong," said Leicester manager Claudio Ranieri. It was also an uncomfortable day for Bob Bradley as his second-from-bottom Swansea City were crushed 4-1 at home by West Ham United, the fifth time in six matches they have conceded three or more. Burnley edged away from the danger zone with a 1-0 victory over Middlesbrough and Sam Allardyce's first match as Crystal Palace manager ended with a 1-1 draw at Watford. -Reuters