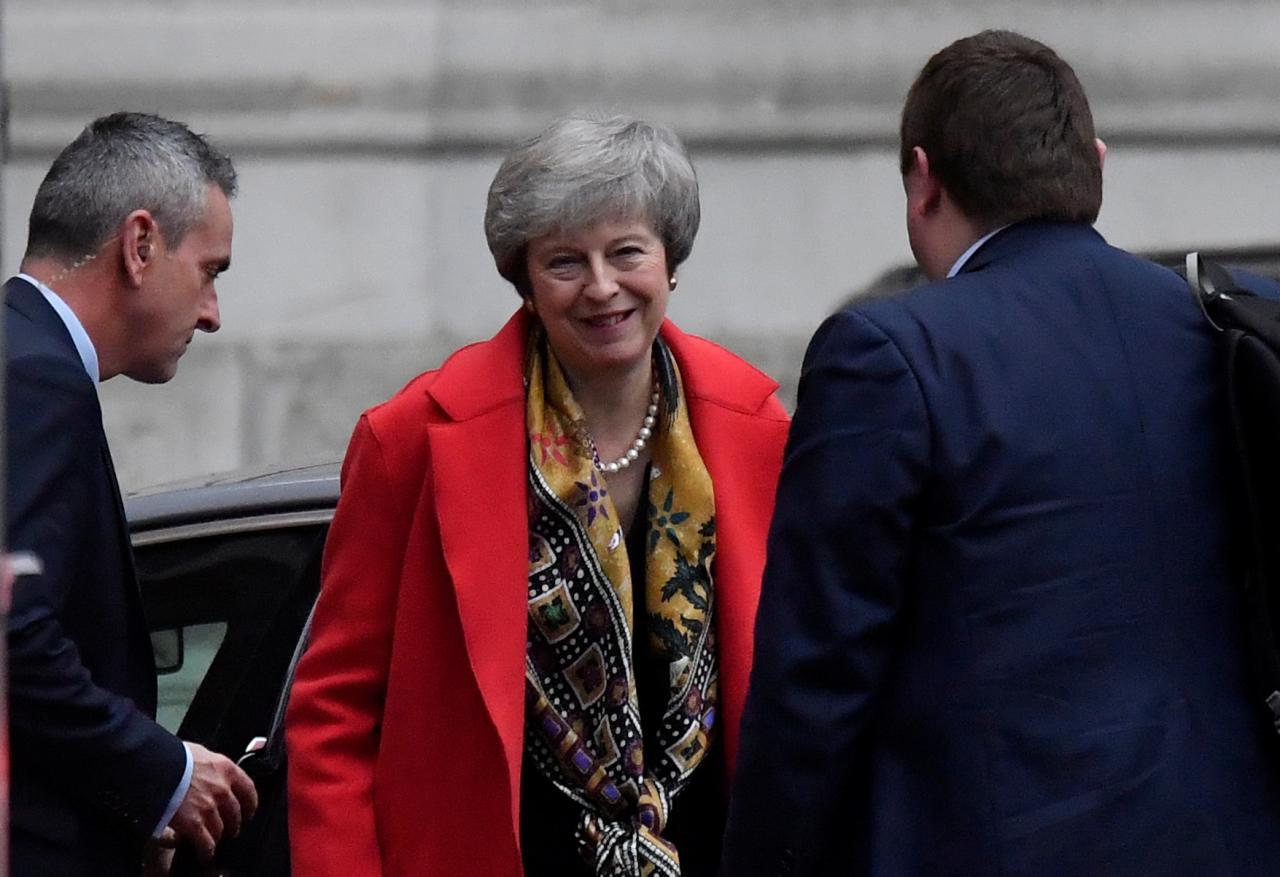 LONDON (Reuters) - Parliament’s vote on Prime Minister Theresa May’s Brexit deal will go ahead on Dec. 11, her office said on Thursday, rejecting suggestions from lawmakers that she should seek ways to avoid a defeat so big it might bring down the government. May has been trying to win over critics of an agreement that would keep close economic ties with the European Union when Britain leaves in March, but her warnings that it’s her deal, no deal or no Brexit have fallen flat so far. With parliament mid-way through a five-day debate on the Brexit deal before the vote on Tuesday which will define Britain’s departure from the EU and could determine May’s future as leader, she looks set to lose the vote. A defeat could open up a series of different outcomes to Britain’s departure from the EU, the country’s biggest shift in trade and foreign policy for more than 40 years, ranging from leaving without the deal to holding a second referendum on membership. The Times newspaper reported that senior ministers were urging May to delay the vote for fear of a rout and several lawmakers said they suspected the government may try something to postpone what would be a game-changing defeat. “The vote will take place on Tuesday as planned,” May’s spokeswoman said. The House of Commons leader, Andrea Leadsom, also told parliament the vote would go ahead on Dec. 11. Graham Brady, chair of the so-called 1922 committee which represents Conservative lawmakers, said he would welcome a delay to the vote to help May provide clarity over one of the most contentious parts of her plan - the Northern Irish backstop. But any such delay would anger lawmakers. Both opponents and allies alike have spent days criticising the agreement, especially the backstop, intended to ensure there is no return to a hard border between British-ruled Northern Ireland and EU-member Ireland. Brexit supporters and May’s nominal allies in Northern Ireland’s Democratic Unionist Party say it could leave Britain forced to accept EU regulations indefinitely, or Northern Ireland treated differently from the rest of the United Kingdom. EU supporters say Britain would become little more than a rule-taker, offering the worst of all worlds. Many want to see the government lose on Tuesday.

Some lawmakers have called on May to change the deal, and have suggested she could use an EU summit next week to try to win some concessions from officials to try to ease some of their concerns. But EU negotiator Michel Barnier said on Thursday the deal was the best Britain will get, while British finance minister Philip Hammond said it was “simply a delusion” to think the agreement could be renegotiated if parliament rejects it. May has toured the country and television studios to try to sell her deal, and on Thursday she used an interview on BBC radio to press on with her bid to persuade lawmakers to back her deal. “There are three options: one is to leave the European Union with a deal ... the other two are that we leave without a deal or that we have no Brexit at all,” she said. In one potential concession, May said that she recognised there were concerns among lawmakers about the Northern Irish backstop and that she was looking at whether parliament could be given a greater role in deciding whether to trigger it. “I am talking to colleagues about how we can look at parliament having a role in going into that and, if you like, coming out of that,” she said. But some of her allies say she needs more time, with Brady telling Sky News: “I don’t think there’s any point in ploughing ahead and losing the vote heavily.” “If the prime minister asked for a few days I’m sure the House of Commons would be happy to give the prime minister a few more days. Most members of parliament are keen to make progress on this and to do so in a sensible way.” But experts say delaying the vote may not be so easy. “It is difficult for the government to avoid a vote without the agreement of the House (of Commons) now that the debate is up and running,” said Hannah White, deputy director of the Institute for Government.