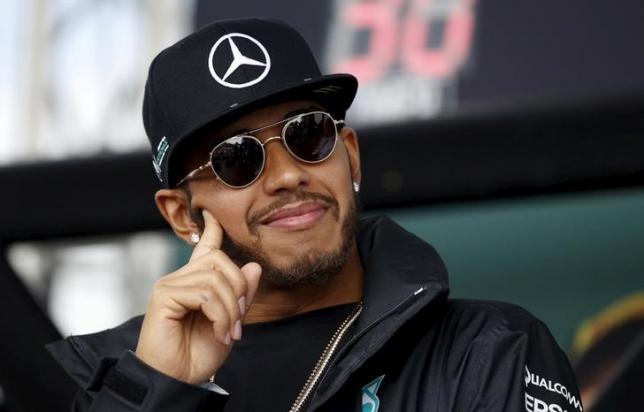 MANAMA - Formula One world champion Lewis Hamilton says he has no concerns about Mercedes team mate Nico Rosberg's five-race winning streak or his own poor starts this season. The Briton, who has not won a race since clinching his third title in Texas last October, told reporters he felt psychologically stronger than ever despite the setbacks. "This is a psychological game, for sure," Hamilton told reporters after finishing third in Sunday's Bahrain Grand Prix despite starting on pole position for the second race in a row. "It is a battle. I guess with age and experience, I’m in the most solid place I’ve ever been psychologically. There’s very little if anything that can penetrate that ... there’s a long way to go." Referencing Muhammad Ali's 'Rope a Dope' tactics in the 1974 'Rumble in the Jungle' heavyweight title fight against George Foreman, Hamilton suggested Rosberg's early season victories might not count for anything in the end. "You can’t win them all," he added. "Not that this is the same, but Muhammad Ali with that Rumble in the Jungle, he got the dude to believe that he was winning and he didn’t. So anything can happen." Hamilton is now 17 points behind Rosberg, but 19 races remain in a championship with more rounds than ever. He had looked a good bet for a third successive win in Bahrain after seizing pole with the fastest ever lap around the Sakhir circuit but once again lost out at the start. Rosberg led through the first corner and romped away untroubled, while Hamilton was hit broadside by the Williams of Finland's Valtteri Bottas and had to fight back from seventh. Hamilton had also started on pole in Australia two weeks earlier, when both Mercedes drivers were jumped by the Ferraris before eventually finishing one-two. "I honestly am just really grateful that I was able to continue to get third place, considering it could have been a million times worse than that," he said. Hamilton was confident the start problems would be resolved for the next race and played down any psychological advantage Rosberg might be building. "I couldn’t care less if he’s won the last five," he said. "It’s the last two. Only two in the season so it doesn’t count, the last five. If you win consecutively in the season that’s something. But five over two seasons, for me that doesn’t psychologically mean anything. "I feel really positive generally, even though we have lost the first two races ... I’ve had two poles and we are going to get more. There’s no real flaws in our procedure and how we are working. It will start getting better." -Reuters