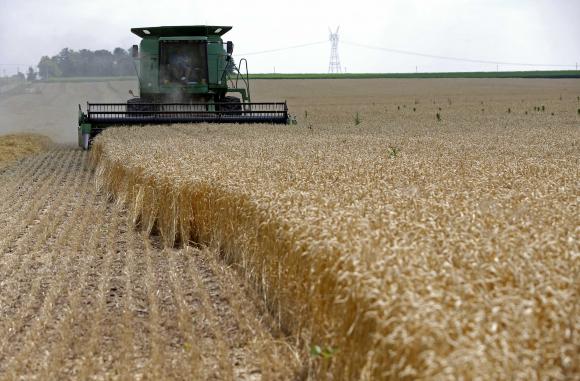 CHICAGO (Reuters) - Across the US Midwest, the plunge in grain prices to near four-year lows is pitting landowners determined to sustain rental incomes against farmer tenants worried about making rent payments because their revenues are squeezed. Some grain farmers already see the burden as too big. They are taking an extreme step, one not widely seen since the 1980s: breaching lease contracts, reducing how much land they will sow this spring and risking years-long legal battles with landlords. The tensions add to other signs the agricultural boom that the US grain farming sector has enjoyed for a decade is over. On Friday, tractor maker John Deere cut its profit forecast citing falling sales caused by lower farm income and grain prices. Many rent payments – which vary from a few thousand dollars for a tiny farm to millions for a major operation – are due on March 1, just weeks after the US Department of Agriculture (USDA) estimated net farm income, which peaked at $129 billion in 2013, could slide by almost a third this year to $74 billion. The costs of inputs, such as fertilizer and seeds, are remaining stubbornly high, the strong dollar is souring exports and grain prices are expected to stay low. How many people are walking away from leases they had committed to is not known. In Iowa, the nation's top corn and soybean producer, one real estate expert says that out of the estimated 100,000 farmland leases in the state, 1,000 or more could be breached by this spring. The stakes are high because huge swaths of agricultural land are leased: As of 2012, in the majority of counties in the Midwest Corn Belt and the grain-growing Plains, at least 40 percent of farmland was leased or rented out, USDA data shows. "It's hard to know where the bottom is on this," said David Miller, Iowa Farm Bureau's director of research and commodity services. SIGNS OF TROUBLE Grain production is, however, unlikely to be affected in any major way yet as landowners will rather have someone working their land, even at reduced rates, than let it lie fallow. But prolonged weakness in the farm economy could send ripples far and wide: as farms consolidate, "there would be fewer machinery dealers, fewer elevators, and so-on through the rural economy," said Craig Dobbins, professor of agricultural economics at Purdue University. Jon Sparks farms about 1,400 acres of family land and rented ground in Indiana. His nephew wants to return to work on the farm but margins are tight and land rents high. Sparks cannot make it work financially. "We can't grow without overextending ourselves," Sparks said. "I don't know what to do." Landowners are reluctant to cut rents. Some are retirees who partly rely on the rental income from the land they once farmed, and the rising number of realty investors want to maintain returns. Landlords have also seen tenants spend on new machinery and buildings during the boom and feel renters should still be able to afford lease payments. "As cash rent collections start this spring, I expect to see more farm operators who have had difficulty acquiring adequate financing either let leases go or try and renegotiate terms," said Jim Farrell, president of Farmers National Co, which manages about 4,900 farms across 24 states for land-owners. Take an 80-acre (32 hectare) farm in Madison County, Iowa, owned by a client of Peoples Company, a farmland manager. The farmer who rented the land at $375 an acre last year offered $315 for this year, said Steve Bruere, president of the company. The owner turned him down, and rented it to a neighbor for $325 -- plus a hefty bonus if gross income tops $750. There are growing numbers of other examples. Miller, of the Iowa Farm Bureau, said he learned about a farmer near Marshalltown, in central Iowa, who had walked away from 650 acres (263 hectares) of crop ground because he could not pay the rent. Just days later, he was told a north-central Iowa farmer breached his lease on 6,500 acres. COURTS OR LOANS Concern about broken leases has some landlords reviewing legal options, according to Roger A. McEowen, director of the Iowa State University Center for Agricultural Law and Taxation. His staff began fielding phone calls from nervous landowners last autumn. One catch is that many landlords never thought to file the paperwork to put a lien on their tenants' assets. That means landowners "can't go grab anything off the farm if the tenant doesn't pay," McEowen said. "It also means that they're going to be behind the bank." Still, farmers could have a tough time walking away from their leases, said Kelvin Leibold, a farm management specialist at Iowa State University extension. "People want their money. They want to get paid. I expect we will see some cases going to court over this," he added. To avoid such a scenario, farmers have begun turning to banks for loans that will help fund operations and conserve their cash. Operating loans for farmers jumped 37 percent in the fourth quarter of 2014 over a year ago to $54 billion, according to survey-based estimates in the Kansas City Federal Reserve bank's latest Agricultural Finance Databook. Loans with an undefined purpose -- which might be used for rents, according to the bank's assistant vice-president Nathan Kauffman -- nearly doubled in the fourth quarter of 2014 from a year earlier to $25 billion. Total non-real estate farm loan volumes jumped more than 50 percent for the quarter, to $112 billion. "It's all about working capital and bankers are stressing working capital," said Sam Miller, managing director of agricultural banking at BMO Harris Bank. "Liquidity has tightened up considerably in the last year."