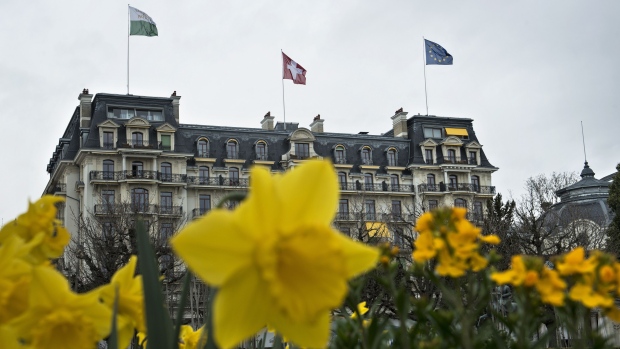 LAUSANNE, SWITZERLAND - Hundreds of journalists have been crammed into a pair of large lounges at a 19th century hotel for over a week now, eager for any scrap of information on closed door negotiations between Iran and six world powers on Tehran's nuclear programme. Reporters from dozens of American, European, Israeli and Iranian television outlets are confined to the press rooms, which have becoming increasingly filthy after seven days of deadlocked negotiations. Most Iranian reporters are in one room, with Western, Chinese and Arabic teams in the other. After more than a week with only a few hours of sleep a night, many reporters are grumpy and restless. Some complain about the smell of unwashed colleagues and competitors. But there are positive aspects as well. Friendship and close cooperation between Iranian journalists working for state and opposition media became routine. Some reporters for state media shared their information with Iranian journalists from the BBC's Persian service and Radio Farda, both of which are banned in Iran by the government. Analysts sympathetic to the Iranian government offer themselves for television interviews all day long, while a representative of a pro-Israel lobby group was on site questioning the wisdom of engaging Iran. U.S. television reporters often did live "hits" in the wee hours of the morning. Delegates often negotiated well into the night. Asked what the atmosphere was like at the negotiating table after an all-night session from Wednesday into Thursday, Iran's Foreign Minister Mohammad Javad Zarif said: "Sleepy". Media stampedes are commonplace. Security officers keep reporters penned behind velvet ropes. Every so often cameramen and photographers squeeze into a narrow doorway to train their lenses on a distant official passing out of the elevator to a meeting room. The luxury Beau-Rivage hotel where the talks are underway is not cheap. Rooms cost around $500 a night. And it was the site of some significant historical moments. Czechoslovakia, created in the wake of the partition of the Austro-Hungarian empire after the First World War, was signed into existence here. Five years later the Treaty of Lausanne, which established the borders of modern Turkey and carved up the Middle East, was negotiated in a ballroom at the hotel. After a week of long days and nights, the normally pristine hotel is looking slightly worse for wear. The tables journalists are working on are covered in trash and coffee stains. Mice have been spotted gobbling up bits of food strewn on the floor. Reporters jokingly compare of waiting for an Iran nuclear accord that diplomats have been describing for a week as "almost agreed" to Samuel Beckett's play "Waiting for Godot", in which two characters wait for the arrival of someone who is always expected but never appears. Everyone follows Twitter feeds. One favourite is that of a reporter from a Middle East-focused website, who tweets real time updates of what's happening at the talks from morning til night, with brief bulletins such as: "Member of Iran expert team going upstairs." In the press rooms, rumours circulate as often as coffee cups spill on tablecloths. If foreign ministers start to speak, reporters rush around and start calling people on their mobile phones. After ministers speak, reporters translate comments for each other from Farsi, German, French, Russian or English. And there are the false alarms. One Tweet had Iranian Foreign Minister Mohammad Javad Zarif announcing that after 18 months of negotiations a deal had been reached. That Tweet was posted on April 1: April Fool's Day. A senior delegate complained about the endless negotiations and inability to predict when he will return home. He was running out of shirts. "I will have to pay 50 bucks each to get them cleaned by the hotel," he told reporters. He was afraid to go swimming in the hotel pool for fear journalists would chase him into the water and demand information about Iran's uranium stockpiles. Reporters have taken to washing socks, shirts and underwear in hotel sinks. And the manager of the Beau-Rivage complained to a local newspaper that reporters aren't spending any money in the hotel. Several Western reporters said that was nonsense. One boasted that his hotel bar bill from the previous evening had been in the hundreds of dollars. He is not alone. In the evening reporters populate the hotel bar, where they mingle with officials seeking respite from the monotony of the negotiations. It's not a place for those on expense account whose bosses closely read receipts: cocktails start at $25. A favourite is "La Quintaesencia", made from Cuban rum, Aperol, Swiss bitter and vermouth, which comes in at $72. Banished from the hotel garden, television crews have been camping along the lakeside boulevard with telephoto lenses to capture images of anyone coming onto the hotel terrace for a breath of fresh air or a cigarette. Any appearance in the garden - even if it is a hotel waiter - sparks a flurry of filming. The photographers know which rooms the top officials are staying in. One cameraman described an "excellent shot" of Kerry in the morning opening his curtains, looking out briefly and then closing them. On several occasions, Kerry donned spandex cycling clothes and a helmet and went cycling along the lake. During first ride, his bicycle chain broke. When he went into a shop to get a new chain the ship-owner refused to take money. - Reuters