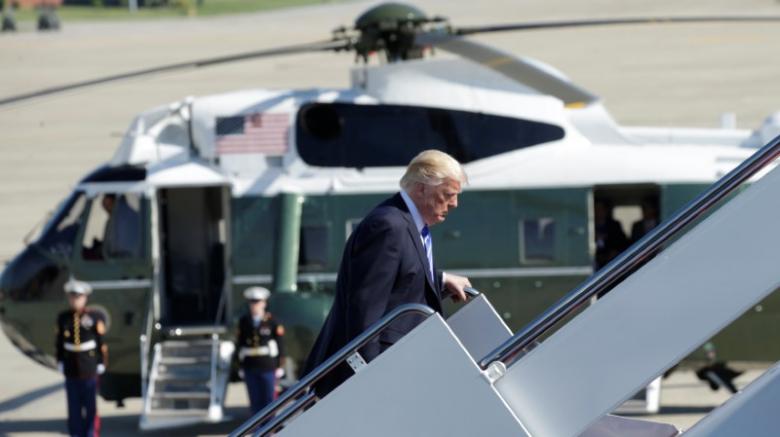 WASHINGTON – A small but growing number of US President Donald Trump's fellow Republicans called on Wednesday for an independent probe of possible collusion between his 2016 campaign and Russia, and one even mentioned impeachment, spurred by a memo from the fired FBI chief that Trump tried to impede the agency's investigation.

The tumult in Washington deepened over allegations Trump had sought to end the FBI's investigation into ties between Trump's first national security adviser, Michael Flynn, and Russia.

U.S. stocks were on track for their worst day in almost two months and the dollar dropped as investors fled risky assets amid uncertainty about the president's ability to deliver on tax and regulatory changes. Prices of bonds, regarded as a safe haven in times of market turbulence, rallied.

James Comey, whose firing as FBI director last week triggered a political firestorm, wrote a memo detailing Trump's comments to him in February saying "I hope you can let this go," referring to the Flynn probe, a source who has seen a memo written by Comey said on Tuesday.

Trump removed Comey in the middle of an FBI investigation into alleged Russian meddling in the 2016 U.S. presidential election, and possible ties between Trump's campaign and Russia. In a separate but related probe, the FBI is looking into Flynn's ties with Russia.

Democratic lawmakers have demanded that the Justice Department name a special prosecutor to investigate the Russia matter.

Asked by reporters whether he thought the allegations against Trump were grounds for impeachment, Republican Representative Justin Amash said, "If the allegations are true, yes. But everybody in this country gets a fair trial, including the president or anyone else."

Amash is a member of the hard-line House Freedom Caucus who has already has called for an independent commission to investigate. Asked if he trusted Comey or Trump, Amash replied: "I think it’s pretty clear I have confidence in Director Comey."

It would be significant if more Republicans began to talk about impeaching the president, as the party holds a majority in both chambers of Congress. A simple majority is required in the House to impeach a president, which would lead to a trial by the Senate and possible removal from office.

Republican Senator Lisa Murkowski said on Wednesday it may be time for an independent commission or special prosecutor, expressing concern about "the continuous and often conflicting reports about President Trump, the FBI and Russia."

"The American people deserve to know the truth," she said, adding it is imperative to restore the public's trust.

Republican Adam Kinzinger, a member of the House of Representatives Foreign Affairs Committee, was among Republicans calling for an independent probe. He told CNN on Wednesday, "I think we are in the position now where it's time for an independent commission or a special prosecutor or whatever."

Republican Representative Steve Knight on Tuesday said he joined "many of my colleagues in supporting the assignment of a special prosecutor to take over the ongoing FBI investigation."

As the controversy swirled in Washington, Trump had defiant words during a speech to U.S. Coast Guard Academy graduates in Connecticut, complaining about media coverage and saying no politician in history "has been treated worse or more unfairly."

Trump said that "adversity makes you stronger," adding that things are not always fair, but "you have to put your head down and fight, fight, fight. Never ever, ever give up. Things will work out just fine."

The Comey memo caused alarm on Capitol Hill and raised questions about whether Trump attempted to interfere with a federal investigation, something that might constitute obstruction of justice and could potentially be invoked in an attempt to impeach Trump.

The White House denied the report, saying it was "not a truthful or accurate portrayal of the conversation between the president and Mr. Comey."

It followed a week of chaos at the White House after Trump fired Comey on May 9. Criticism of the president intensified after it emerged on Monday that the president discussed sensitive national security information about Islamic State with Russian Foreign Minister Sergei Lavrov and Russia's ambassador in Washington at a White House meeting last week.

Russian President Vladimir Putin said on Wednesday that Trump had not passed on any secrets to Lavrov. Putin made light of the matter at a news conference in Russia, saying Moscow was ready to hand a transcript of the meeting to U.S. lawmakers if that would help reassure them. –Reuters