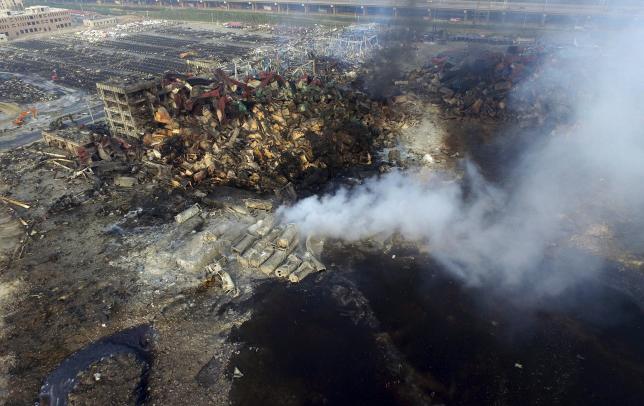 TIANJIN - Chinese soldiers and rescue workers in gas masks and hazard suits searched for toxic materials in China's port of Tianjin on Sunday as Premier Li Keqiang arrived to offer condolences, days after explosions flattened part of a national development zone. The goal is to clear the chemicals before any rain falls, which could create further toxic gas. The death toll rose to 112 from Wednesday's disaster, which sent massive yellow and orange fireballs into the sky, hurled burning debris across a vast industrial area, crumpled cars and shipping containers, burnt out buildings and shattered windows of nearby apartments. The number of missing rose to 95, most of them fire fighters, state media said, suggesting the toll would rise significantly. More than 720 people remained in hospital. Officials acknowledged the presence of toxins but said they posed no risk to people outside a two-km evacuation zone surrounding the blast area. "I can responsibly say that there will be no secondary damage to the people," Shi Luze, the chief of staff of the People's Liberation Army's Beijing Military Region, told reporters, referring to people outside the zone. Shi confirmed the presence of more than 100 tons of deadly sodium cyanide, stored at two separate sites. He said workers were trying to clear the area of chemicals before possible rain showers, which could create toxic gas. Fire crews were criticised for using water to douse flames in the initial fire, which may have contributed to the blasts, given the volatile nature of the chemicals involved. Greenpeace said tests around the blast site showed that water supplies were not severely contaminated with cyanide, but that they did not "disprove the presence of other hazardous chemicals in the water". "Greenpeace reiterates its call for authorities to implement a comprehensive survey of hazardous chemicals currently present in air and water supplies and make public all information," it said. In an earlier statement, the environmental organisation urged the government to establish a five-km (three-mile) evacuation zone. China evacuated residents who had taken refuge in a school near the site of the blasts on Saturday after a change in wind direction prompted fears that toxic chemical particles could be blown inland. It was not clear from media reports how many people were evacuated, but the order came as a fire broke out again that day at the blast site, a warehouse specially designed to store dangerous chemicals, according to Xinhua. Some 6,300 people have been displaced by the blasts. Shockwaves were felt by residents in apartment blocks kilometres away in the city of 15 million people. China's top prosecutor, the Supreme People's Procuratorate, opened an investigation into the warehouse explosions, Xinhua reported, and "will look into possible illegal acts, such as abuse of power or dereliction of duty and deal with those acts which may constitute crimes". About 100 people from a residential area near the blast site protested outside a hotel where a government press briefing was held, angry that dangerous chemicals had been stored near their homes. "I'm very worried that these dangerous chemicals will harm my health," said Zhang Yinbao, who works in the chemical industry and whose apartment building is only 800 metres from the blast site. For a warehouse the size of the one that exploded, that's closer to a residential area than allowed under laws that deal with the storage of dangerous materials, according to state media reports. "From a legal perspective it's unreasonable that dangerous chemicals would be so close," Zhang said, calling for a thorough investigation and compensation. Emotional family members of missing fire fighters - 85 of the 95 people missing - also protested, marching to district government offices where they scuffled with police before being dispersed. Industrial accidents are not uncommon in China following three decades of fast growth. A blast at an auto parts factory killed 75 people a year ago. -Reuters