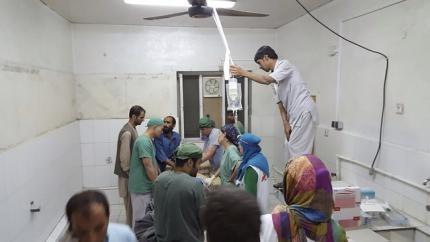 KABUL - Police and residents said Afghan government forces had regained control of most of the besieged city of Kunduz on Monday, and some shops in the centre of the provincial capital opened for the first time since it fell to Taliban fighters a week ago.Residents said it was the first time in eight days that they had not heard gun battles and were able to leave their homes to buy food and take stock of the damage done. Soldiers were conducting house-to-house searches as they continued to push Islamist insurgents out of areas that had witnessed fierce fighting, with control of pockets of the city swinging several times between the Taliban and Afghan army."The centre of the city is normal," said Abdul Ghafoor, a Kunduz resident, but added it would still take time to recover. "The city smells so bad with dead bodies still on the pavements and in the sewage. The local government must do something."Battles have raged around Kunduz, a strategic city of 300,000, as government forces backed by U.S. air strikes sought to drive out Taliban militants, who seized the city a week ago in one of their biggest victories in the 14-year insurgency. The U.S. government said it was investigating whether its military was responsible for an air strike that killed 22 people in an Afghan hospital run by aid group Medecins Sans Frontieres on Saturday. The U.N. human rights chief said the hospital assault was "inexcusable" and could amount to a war crime.The U.S. military said it conducted an air strike "in the vicinity" of the MSF hospital as it targeted Taliban insurgents who were directly firing on U.S. military personnel. It has not acknowledged hitting the hospital.Any confirmation of U.S. responsibility for the hospital deaths would deal a blow to Afghan President Ashraf Ghani's policy of forging closer ties with the United States. His predecessor, Hamid Karzai, fell out with his backers in Washington, in part over the number of civilians killed by U.S. strikes.While the government has claimed to have regained control of the city before, and fighting has continued, weary residents were hopeful that the worst of the violence may now be over. "It is going to take a long time for the city to return to normality again," said Abdullah, a Kunduz resident. "People are still very scared to come out." -Reuters