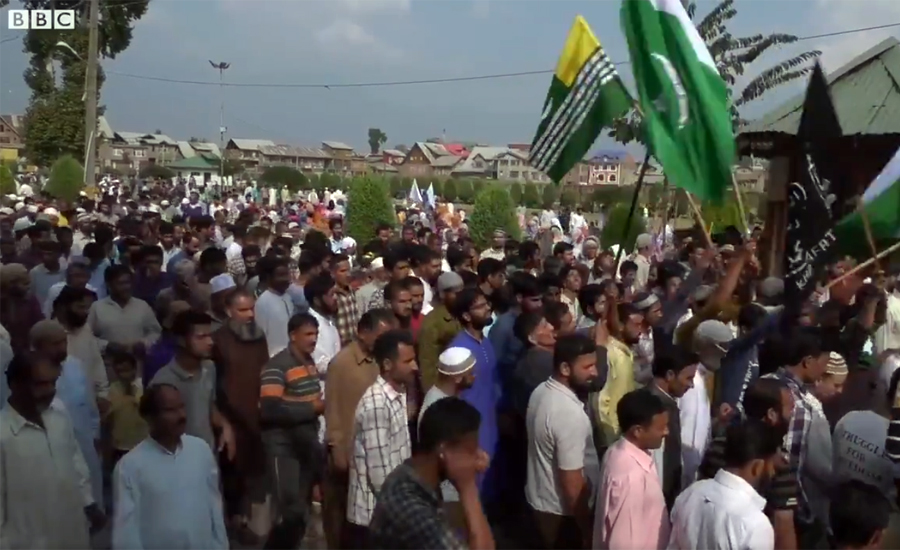 SRINAGAR (KMS) – In Occupied Kashmir, the authorities further tightened restrictions on Saturday to prevent people from staging further demonstrations after the speech of Prime Minister Imran Khan at the UN General Assembly. Soon after Imran Khan’s speech, hundreds of people came out of their homes, shouting slogans in support of Imran Khan late on Friday night and calling for the freedom of Kashmir from Indian occupation. Police vans fitted with speakers made public announcements in Srinagar, on Saturday, about restrictions on movement while additional troops were deployed to prevent any protests, according to officials and two eyewitnesses. The troops also blocked access to the main business centre of Srinagar with razor wire. Curfew and lockdown continued for 55th consecutive day on Saturday (today) in Indian Occupied Kashmir (IOK). Normal life continues to get hit across the Valley for the 54th consecutive day as shops and business establishments are closed from Srinagar to as far as Uri town in Baramulla district in Kashmir and Muslim majority area of Doda in Jammu region in IOK. Though government offices and schools are open, they almost remain empty despite the efforts of the administration to make it look otherwise as employees are not turning up and parents are reluctant to send their wards to educational institutions because of apprehensions about their safety. Even as few vendors have set up stalls at various places and majority of the landlines have been restored, but they couldn’t cater to the needs of the people due to the imposation of curfew. Main markets and other business establishments continued to remain closed and public transport is off the road in the occupied territory. Most of the interiors in Srinagar’s old city continue to remain sealed with iron barricades and concertina wire while deployment of police and paramilitary forces is intact in the city and all major towns and villages across the Kashmir valley. The clampdown has not only affected inter-district road connectivity drastically, but has also thrown great challenges for old city residents due to shutting of factories, industries and other work places.