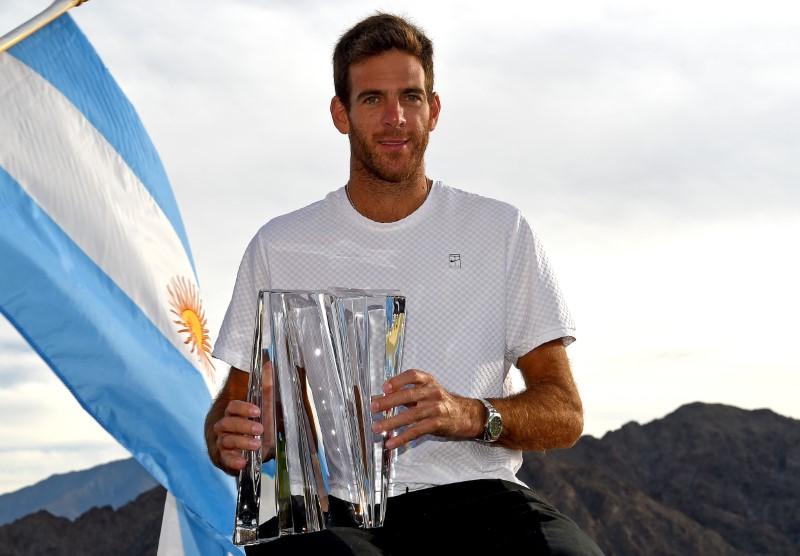 CALIFORNIA (Reuters) - An emotional Juan Martin del Potro could barely believe he had finally won a Masters 1000 series title at the 51st attempt at Indian Wells on Sunday but is determined to keep the trophies coming in his late career renaissance.

The tall Argentine with a rocket of a forehand has endured years of injury-induced heartbreak but on Sunday was back at the very top of the game, beating no less than Roger Federer in an enthralling Indian Wells final.

“It’s so big,” Del Potro said. “I cannot believe I won this tournament, beating Roger in a great final and level of tennis.

“I’m number six in the world, I think? Which is so good to me. And I’m excited to keep working ... I just want to keep winning titles like this if I can.”

Del Potro was tipped as a future world number one in 2009 after the then 20-year-old reached the French Open semi-finals, the Australian Open quarter-finals before capturing his maiden grand slam at Flushing Meadows.

He failed to break the dominance of Federer, Rafa Nadal, Novak Djokovic and Andy Murray in the years following, though, and a string of career-threatening wrist injuries hampered his game and almost forced him to give up on tennis.

“I was close to quitting tennis because I had three surgeries on my wrist and I couldn’t fix the problem,” the 29-year-old recalled earlier this week at the BNP Paribas Open.

“I got depressed at home for a long while, and I wasn’t happy doing the effort to recover my wrist. That’s what I was thinking about, quitting tennis.

“But thank God I’m here and healthy, and I’m playing tennis again. I’m doing this because I love it.”

The Argentine has regained form over the last two seasons but although he entered Sunday’s final on a 10-match winning streak, he was still inevitably playing underdog to Swiss world number one Federer.

Never short of fighting spirit even when his joints were unable to back it up, del Potro saved three match points and blew one of his own on the way to a victory that snapped Federer’s 17-match winning streak this year.

“It was an unbelievable match in all ways. We played a great level of tennis. The people were excited on every single point,” Del Potro said.

Del Potro, who had already won his first title of the season at Acapulco earlier in March, will be looking for the 23rd of his career at next week’s Miami Open.