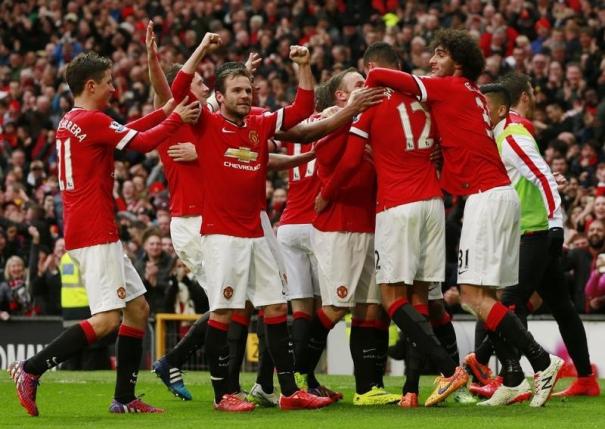 LONDON - The swagger has returned to Manchester United and their recent revival has provided genuine grounds for believing they are ready to challenge again for the top prizes in the game. After two years of disappointment following the retirement of manager Alex Ferguson, United have beaten arch-rivals Liverpool and champions Manchester City in a run of six successive victories which have lifted them to third in the Premier League. They are well placed to qualify for the Champions League and with manager Louis van Gaal sure to be given substantial funds to bolster his squad, United fans are dreaming of a return to the glory years they enjoyed with Ferguson at the helm. The manner of United's 4-2 win over City on Sunday, the first victory over their neighbours for over two years, only added to the belief swirling around Old Trafford. "Now they are the kings of the city," said United striker Eric Cantona, whose signing by Ferguson in 1992 proved to be the catalyst for an unprecedented era of success. "Sometimes you have a season when you lose games and you finish fourth or fifth," the Frenchman told reporters in Shanghai. "Next year they can win." Cantona should know. The flamboyant forward brought belief to a talented squad and his goals inspired United to win the 1993 title, their first for 26 years and the start of the Ferguson glory days which ended when the Scot retired in 2013. David Moyes endured a dismal 10 months as manager, overseeing a negative style of football completely at odds with the traditions of the club. United finished seventh shortly after Moyes was fired and Van Gaal was handed the reins along with a large transfer kitty. "With a manager from Holland I think it's very important for Manchester United, because it's the same kind of philosophy for the game, Holland and Manchester United," Cantona said. HUMILIATING LOSS They struggled, however, in the first half of the season, suffering a home defeat by Swansea and a humiliating 5-3 loss at promoted Leicester. Van Gaal tinkered with his formation, incurring the wrath of the fans by deploying captain Wayne Rooney in midfield and relying on the brilliance of goalkeeper David de Gea to stay in touch with the leaders. Then, seemingly out of nowhere, the Dutchman stumbled on a winning formula last month. Three first-half goals against Tottenham Hotspur brought back memories of the days when Ferguson's teams would blow opponents away at Old Trafford. Juan Mata scored two superb goals to sink Liverpool at Anfield and Manchester City were overwhelmed by an incessant and ruthless red tide. With Michael Carrick pulling the strings in midfield, the revitalised Marouane Fellaini and Ashley Young tormented the City defence as United roared back from conceding an early goal to secure the most significant win of Van Gaal's tenure. The canny Dutchman knows he must still recruit a top-quality central defender, a more physical central midfielder to compliment the wily Carrick and at least one faster more mobile forward. If United can keep De Gea out of Real Madrid's clutches, they will have the makings of a potent team capable of mixing it with the best once again. - Reuters