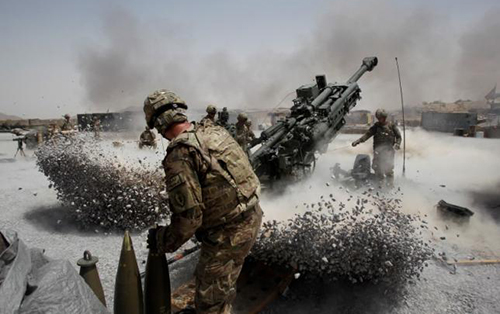 WASHINGTON – Thirteen retired US generals and senior diplomats urged President Barack Obama on Friday to maintain the current US troop level in Afghanistan, saying a reduction would undercut the morale of Afghan government forces and bolster the Taliban. The 13 men oversaw US military operations and policy in Afghanistan during the administrations of Obama and former President George W. Bush. They included retired Army general and CIA director David Petraeus and four other former top commanders of U.S.-led international forces there, as well as five former American ambassadors to Afghanistan. In an open letter to Obama in The National Interest magazine, they said maintaining the current level of 9,800 U.S. troops would "likely have helpful effects on refugee flows, the confidence of the Taliban, the morale of the Afghan military and Afghan people, the state of the Afghan economy and perhaps even the strategic assessments of some in Pakistan." "Conversely, we are convinced that a reduction of our military and financial support over the coming months would negatively affect each of these," they wrote. The letter was published days before the current U.S. military commander in Afghanistan, Army General John Nicholson, is expected to submit a review of U.S. military strategy in Afghanistan. Under Obama's current plan, the number of US military personnel is due to drop to 5,500 by 2017. But Taliban forces lately have made significant gains and rejected peace negotiations with Afghanistan's government, which has been weakened by internal differences. Obama has made extracting the United States from its 15-year-long war in Afghanistan a top priority of his presidency, unsuccessfully pursuing efforts to bring the Taliban into peace talks."Afghanistan is the place where al Qaeda and affiliates first planned the 9/11 attacks and a place where they continue to operate - and is thus important in the broader effort to defeat the global extremist movement today," the retired generals and diplomats wrote. "It is a place where al Qaeda and ISIS (Islamic State) still have modest footprints that could be expanded if a security vacuum developed. If Afghanistan were to revert to the chaos of the 1990s, millions of refugees would again seek shelter in neighboring countries and overseas, dramatically intensifying the severe challenges already faced in Europe and beyond." The signatories also included: retired Marine Corps General John Allen, who served as Obama's chief representative to the U.S.-led anti-Islamic State coalition; and former US ambassadors to Afghanistan Ryan Crocker and Zalmay Khalilzad.  –REUTERS