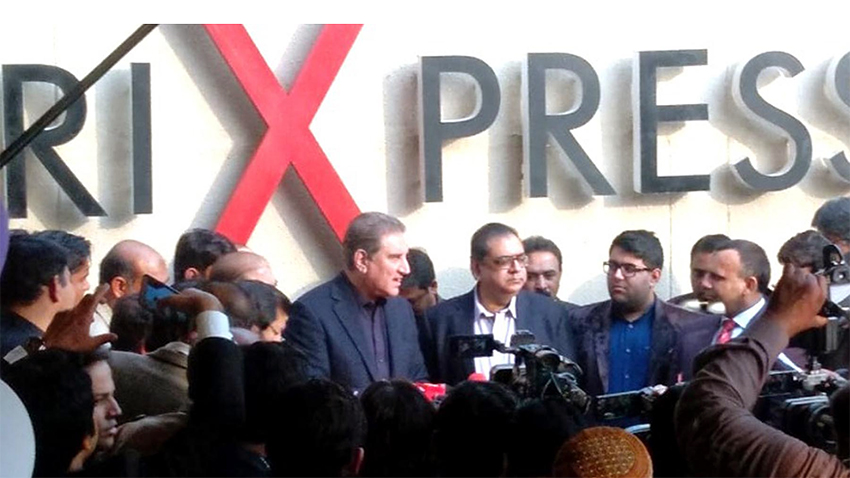 MULTAN (92 News) – Minister for Foreign Affairs Shah Mahmood Qureshi on Sunday said that Rs10 million reward on peace talker Navjot Singh Sidhu’s beheading is regrettable, saying, “former Indian cricket star tried to resolve an old issue between both the countires.” It is pertinent to mention here that the Indian Hindu extremist group Yuva Vahini (HYV) announced a reward of Rs10 million to anyone beheading peace talker former crickter and Punab cabinet Minister Navjot Singh Sidhu. Speaking to the journalists – regarding the opening of Kartarpur Corridor – the foreign minister said this decision was taken to facilitate the Sikh pilgrims to visit one of their holiest places. He said the goodwill gesture of Pakistan has been appreciated in the whole world. On economic situation, the FM Qureshi said the rupee will become stable once the economic conditions are improved. He said readjustment in currency valuation will have a positive impact on our exports. He said many economic experts were of the same opinion that devaluation of rupee will help increasing exports by staying in competition at international level. The minister said when the PTI government came to power, economic situation was dire and financial and trade deficits had reached at a staggering level. “Pakistan wants negotiated political settlement of Afghan conflict as it believes that there is no military solution to this issue,” FM Qureshi said. He added that Pakistan is committed to an Afghan-led and Afghan-owned peace process in Afghanistan and will continue to play a positive role in bringing peace and stability in the neighboring country. The foreign minister said the US has also agreed with the stance of Pakistan and reviewed its position by appointing Zalmay Khalilzad as Special Representative for Afghan reconciliation. He said during Khalilzad's recent visit to Pakistan, constructive talks were held. He said even Afghan government that was earlier not willing to sit with Taliban, has now also reviewed its decision. Responding to the Kashmir issue, Shah Mehmood Qureshi said that he has suggested to the National Assembly’s Foreign Affairs Committee to highlight the excessive human rights violations in Occupied Kashmir in London on the occasion of Kashmir Day on February 5, next year. He said whole nation is unified on the issue of Kashmir and there is no party politics or schisms on the stance of Pakistan. He said on the basis of reports of the UN and Parliamentary Group of House of Commons the international community will be urged to play its due role to stop the killing of innocent Kashmiris by the Indian forces. The Foreign Minister said the Kashmir issue will also be raised during the EU meeting in Brussels next month.