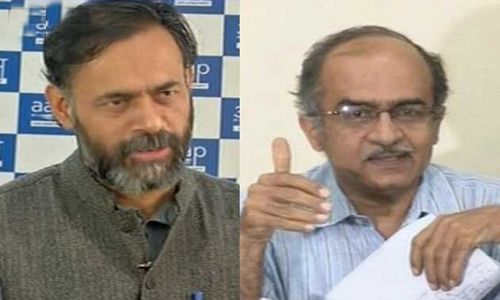 NEW DELHI – Two founding members of an Indian anti-establishment political party were ousted from its top decision-making panel on Saturday, deepening the rift in the party that is seen as a potential challenger to Prime Minister Narendra Modi. The Aam Aadmi Party (AAP), or Common Man party, stormed to power in local elections held in New Delhi last month decimating Modi's Bharatiya Janata Party and casting doubts on the Hindu nationalist leader's popularity in the country. But the party has faced internal challenges after it started governing in Delhi – some leaders have questioned how the party operates and called its chief, Arvind Kejriwal, a dictator. On Saturday, Prashant Bhushan and Yogendra Yadav, who have led much of the attack on the party's internal functioning, were removed from the national executive. This could be a prelude to a sacking from the party itself. Yadav said they were heckled, booed and called 'traitors' at the meeting on Saturday where bouncers got aggressive and man-handled some of the members. Other AAP officials denied these charges. "The party's top leaders are resorting to the kind of hooliganism that other political parties have," Bhushan told reporters after the meeting. Bhushan said they had yet to decide if they would quit the party or seek a re-vote on their ousting. While the two-year-old anti-graft party, that claimed to bring about fair and transparent politics in India, is not an immediate threat, its stunning victory has re-energized regional leaders who are bitterly opposed to Modi and are preparing for a clutch of state elections over this year and the next. –Reuters