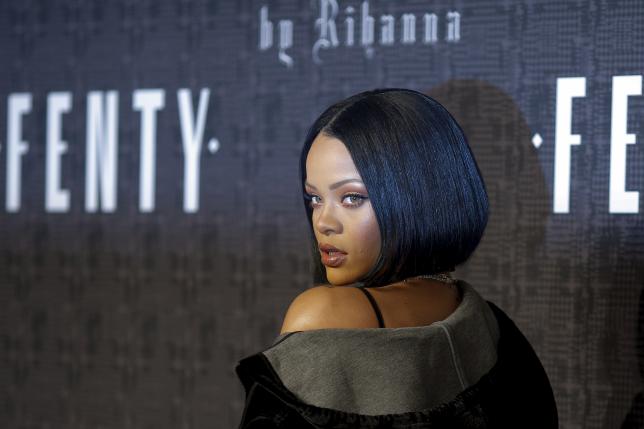 LOS ANGELES - A throat infection forced the 11th-hour cancellation of a Grammy show performance by recording star Rihanna, whose doctors ordered her to rest her voice for 48 hours or risk the hemorrhaging of her vocal cords, organizers said.

In another last-minute Grammy no-show, hip-hop artist Lauryn Hill inexplicably failed to appear for a planned, but unannounced, duet with R&B star The Weeknd despite a dress rehearsal with him earlier in the day, said Neil Portnow, president of the Recording Academy.

Rihanna, 27, an eight-time Grammy winner, had been slated to perform her song "Kiss It Better," from her new album, "Anti," which was released in January after the cutoff period for this year's Grammy eligibility.

But, after a medical examination following Monday's rehearsal, doctors decided she should drop out of the show because she was "at risk of hemorrhaging her vocal chords," her publicist said in the statement read by Grammy organizers to reporters backstage.

"The antibiotics she had been on for three days did not kill the infection adequately. Therefore she cannot perform safely," the statement said.

A representative for Hill, 40, said the former Fugees member "was never confirmed and should not have been advertised as such." Hill was a 1999 Grammy winner for her debut solo album, "The Miseducation of Lauryn Hill.

"The Grammy's announced a performance by Ms. Lauryn Hill prematurely and without approval," her representative said in a statement reported by Billboard magazine. "Ms. Hill had concerts all weekend, leaving no time to prepare, and was uncertain she would even be able to make it to LA in time to rehearse for the event."

However, Portnow insisted that Hill had rehearsed earlier in the day with The Weeknd - real name Abel Tesfaye - who had invited the singer to be a surprise guest when he performed "In the Night," one of two songs he ended up performing solo. Portnow called her no-show "unfortunate," adding it was the intention of the show's producers to welcome her on stage up until the very last moment before she was due to appear. -Reuters