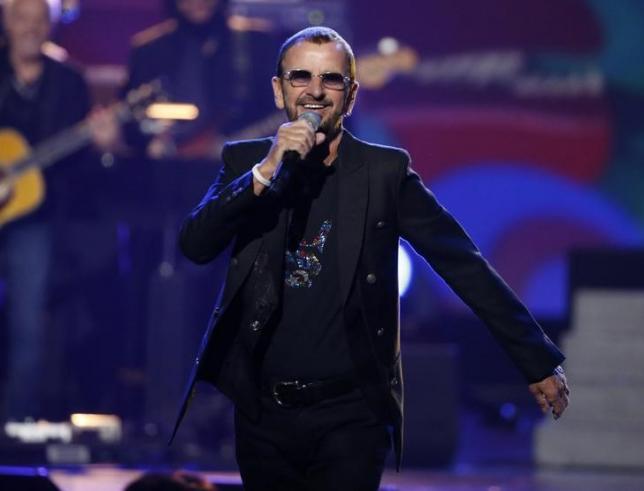 LOS ANGELES - Despite a struggling music industry and a less-than-favorable relationship with online streaming music platforms, former Beatle Ringo Starr is still insistent on making new songs. Starr, 74, released "Postcards From Paradise" this week, his 18th solo studio album featuring 11 original songs by the veteran musician in collaboration with friends such as Peter Frampton and Joe Walsh. "Even though there's very little record industry left, I like to make records because I write. I write with songwriters; I play with other good musicians," Starr told Reuters, noting "because it's what I do." "It's very hard for me to find a stranger these days because I've been around a long time." Starr has witnessed the music industry evolve dramatically over his 50-year career, and consumption is becoming increasingly digital with Apple Inc's iTunes and Amazon.com Inc as well as online streaming platforms such as Spotify and Jay Z's newly announced Tidal. The Beatles famously abstained from going digital until 2010, when its entire back catalog became available exclusively on iTunes. Starr himself still prefers purchasing physical copies of music. "Streaming I don't understand anymore. All I ever hear is that your record has been streamed 17 million times and they give you a check for 12 bucks," he said. "With the established musicians, that seems to be the problem. And the bigger problem with that is there's nothing coming in for the new bands." Starr's career is an integral part of music history as a member of seminal 1960s English band The Beatles alongside Paul McCartney, George Harrison and John Lennon. The "Fab Four" led the British invasion into U.S. pop music and became one of the most successful bands in the world. "Postcards From Paradise" coincides with Starr's induction into the Rock and Roll Hall of Fame in April - the last member of the Beatles to be given the prestigious honor as a solo artist. He'll be inducted by none other than his former bandmate McCartney. "I only found out because Paul called me," Starr said about the ceremony. "I've said yes to it and a few other friends are coming to play and we should have a good night. And I'm finally in the Rock and Roll Hall of Fame." "Postcards From Paradise" has received mainly positive reviews, with Rolling Stone magazine calling it "a masterful summary of Ringo-ness: his cheer, his cheek, his wisdom." - Reuters